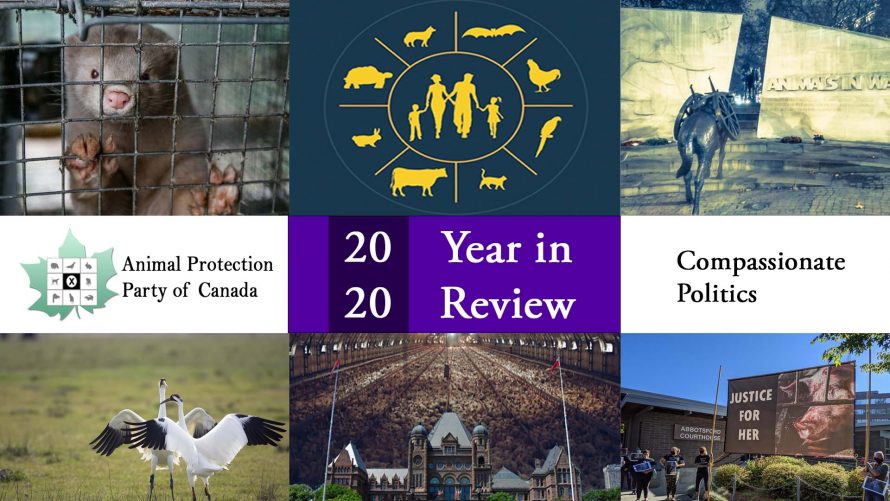 At the beginning of 2020, we said that we were entering the defining decade for humanity and the world. While scientists had been warning of the potential for a global outbreak of a zoonotic disease for decades, no one expected COVID-19 to change the world in the way it did and continues to. The pandemic should act as a wake-up call. Our society needs to change course so we can address the climate crisis, stop the massive loss of biodiversity, and reverse the current destruction of the planet.

We have continued to work hard to represent animals in politics. 2020 has been an important year for animals in Canada, for better and for worse. The pandemic has provided us with an opportunity highlight issues that receive very little public attention.

We wrote about the division of powers that determine which levels of government are responsible for laws protecting animals. Education is an essential component of both animal activism and advocacy. People must be empowered to hold the right level of government accountable in their fight for change and animal representation.

We joined with other organizations to fight the environmentally devastating Teck Frontier open-pit bitumen mine project and won. Planned to disrupt the ecosystem of Wood Buffalo National Park, home to the last remaining nesting site of the whooping crane, we could not stand by while this national treasure was compromised for fossil fuel production. We ran a national TV ad campaign against the proposal and soon after the permit to proceed was denied.

By February the pandemic was already upon us, changing the way we work and live. We immediately joined the call with over 200 organizations, for the government to ban markets that sell and trade wildlife. Zoonotic diseases will continue to proliferate unless we take decisive action to address the root causes of animal exploitation and habitat destruction.

In March, as the pandemic set in, we continued to develop a narrative, including a new platform position, of the consequences of environmental destruction, animal exploitation, and zoonotic diseases.

We also talked about the changing landscape as human behaviour changed, noting how quickly wildlife can recover with the absence of destructive human activities. With travel severely restricted, wildlife flourished with various species extending their range due to the absence of people from their wild spaces. Lake Erie, home to diverse waterbird colonies saw a significant rise in the number of nesting white pelicans who are considered threatened under Ontario’s Species At Risk Act.

By May it was clear that, while the pandemic was taking a heavy toll on our social fabric, this also meant that animal-use industries, which function on just-in-time production and large-scale retail consumption of animal products, were compromised.

So we joined with 15 animal rights parties from around the world calling for a “food revolution” in response to the pandemic. The pandemic exposed to the world the harsh and far-reaching consequences of the global exploitation of animals. We demanded world governments take decisive action to re-imagine our food systems as ecologically and socially responsible for the health of the people, animals, and the planet.

Then in June, Ontario became the second province in Canada to pass ag-gag legislation in the form of Bill 156. This legislation sought to restrict everything from “Save” vigils to undercover investigations. Its intent is effectively to silence all public dissemination of animal cruelty on farms, in slaughterhouses and during transport, by animal advocates, journalists, and concerned employees. We fought alongside organizations across Canada to stop this legislation from passing, but the Ford government sided with the animal agribusiness. We believe parts of the legislation are unconstitutional and need to be challenged. We hired a constitutional lawyer to review the Bill and provide us with an opinion and are preparing to challenge it in court.

That a Bill, so contrary to the interests of society, could be passed in such a short period of time, aimed at hiding farmed animal suffering, highlighted the urgent need to change our electoral system. Premier Ford received only 40% of the popular vote, with 60% of Ontarians voting against his government. Yet he has a majority government, holding 76 seats to the NDP’s 40.  Our first-past-the-post electoral system allows for such regressive legislation as Bill 156. We will continue to advocate for proportional representation so every single vote will count.

We worked to oppose the ongoing efforts to establish a West Coast pinniped, seal and sea lion, hunt calling on the federal Department of Fisheries and Oceans (DFO) to deny any hunt permits and in July, it was announced that the permits would not be granted by the DFO. However, we remain watchful of this issue as the potential for permits in future years still exists.

We also stood with activists who had been charged for exposing animal cruelty. We need to remain vigilant in defending those who risk becoming victims of ag-gag legislative which is designed to hide the real cruelty and suffering imposed on farmed animals in Canada.

In November we made a submission to the Broadcasting Arbitrator about the fair and equal distribution of paid and unpaid air time for political parties during elections. Currently, the majority of free airtime is given to parties that hold seats, while smaller parties, like APPC, receive far less. We argued that it is in the public’s interest that political messages of elected and non-elected political parties receive equal opportunity for public dissemination.

Each Remembrance Day for the past several years we have held memorials for Animal Victims of War. This year we held an online memorial and called for the condemnation of their use in war and military training in Canada. Canada is one of the few remaining NATO countries that hasn’t replaced animal use for military trauma training with high quality alternatives.

Changes for animals and animal products are taking place across Canada.  We wrote to the government on a number of issues, including the National Farm Animal Care Council’s guidelines on the care of pigs and the Government of Canada’s proposed changes to the labeling of plant-based meat alternatives. We are also working with a small group of animal advocates to convince the federal government to prohibit the transport of farmed animals during extreme weather conditions.

In December as part of a coalition of organizations, APPC wrote and submitted an extensive paper to the government condemning the use of three poisons, Compound 1080, Sodium Cyanide, and Strychnine. They are used to kill such species as wolves, coyotes, black bears, skunks and ground squirrels. These poisons cause excruciating deaths and kills large numbers of non-target species.

Most recently, we called for the public and MP’s to support the Jane Goodall Act introduced in the Senate by senator Murray Sinclair, to end the captivity of great apes, elephants, and other exotic species in Canada. While we condemned the slow march to pass animal rights legislation in Canada, we applauded the ongoing efforts to increase protections for animals and improve their representation in our society.

As we speak, the COVID-19 pandemic has spread to mink farms in B.C. and has now infected two mink facilities. We have called on the government to shut down the mink industry, as has taken place in other countries around the world where there have been outbreaks. It is inexcusable to allow this industry to continue when it poses such a high risk of transmission to people and animals.

We are also working hard to prepare for the next election, which may come sooner than later with our current minority government. With a new logo redesign in the works and candidate recruitment ongoing, the next election will be an important opportunity for the Animal Protection Party to expand our reach and messaging to more communities across Canada. The more candidates we have educating people about compassionate politics, the more accountable we can hold the parties in power for their policies which undermine our social and ecological well-being.

The year is closing with widespread vaccination against COVID-19 beginning to role out in some countries. It is unclear if this will mean the return to the world as we once knew it prior to the pandemic. Will world governments focus on restarting their economies with little regard for the continued destruction of nature and the plight of millions of species? Or will there be a paradigm shift in how we relate to the environment and non-human animals? Either way, the Animal Protection Party of Canada will continue to be the only political party in Canada calling for fundamental restructuring of our social, environmental, and political policy.

For animals, people, and the environment we will march forward with animal rights parties and activists around the world in the fight for a compassionate revolution.

Donate to the APPC to help us prepare for 2021 and the next federal election.