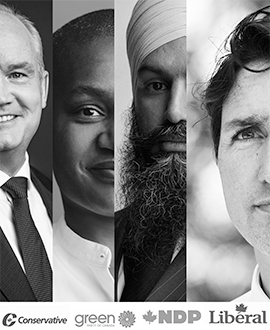 Our candidates are already knocking on doors. They’re talking to voters about how they can best use their votes to help beat the climate heating crisis and protect animals and the environment.

They’d be grateful—as I would—for your financial support. Your contributions (which earn you a generous tax credit) will pay for television, radio, print, and targeted (local and national) social media advertising.

Your generosity, too, will help ensure our candidates have lawn signs, pamphlets, and materials for campaign events.

The Animal Protection Party of Canada’s (APPC) candidates are not like most people running for Canada’s major political parties: Liberal, Conservative, NDP, and Green. Our candidates know that—because Prime Minister Trudeau betrayed his 2015 election promise to end our First-Past-the-Post electoral system—they have scant hope of becoming a Member of Parliament.

Our candidates know, too—and this is why they run—that they can make the climate crisis, and animal and environmental protection decisive ‘ballot box’ issues in their electoral districts.

They also know the party they represent—your party—can influence who wins. That’s not me making an empty political boast. We did the research. We’ve shown it’s true.

In September 2001, four years before we founded the APPC, we campaigned in the Ontario provincial by-election in Beaches—East York. We supported the Liberal candidate: Bob Hunter, co-founder of Greenpeace, friend, and fellow advocate. We also used the by-election to find out if our political campaigns had any effect on votes. That’s important for me to know.

You see, I’m responsible for using your welcome and crucial generosity effectively. We never use it on campaigns that produce more ‘sound and fury’ than significance. They rarely measurably help protect animals and the environment.

To see if our campaigning worked, we selected 10 Elections Ontario voting polls in Beaches-East York as a control group. We didn’t campaign in them. That allowed us to compare vote shifts (if any) between polls where we campaigned and where we did not.

In May 2002, we put our strategy to the test, again. We campaigned for Brian Masse (NDP) in the Windsor West by-election. Brian won. He’s held the seat ever since. He’s also been an intrepid friend of the animals. He supported the private member’s bill designed to strengthen the animal cruelty section of the Criminal Code of Canada and voted to move forward with a ban on cosmetic animal testing.

APPC campaigns matter, not only because they make animal and environmental protection voting issues, but also because they can influence outcomes. It’s the latter that politicians usually care about most.

While our candidates run local campaigns, we’ll also be running a national campaign to make sure the climate heating crisis is a key, decisive issue in the election. Of all the issues we need to address as voting citizens, the climate crisis is the overriding one—for you and me, for the animals, for the planet. Climate heating is that dire; it’s ‘life and death.’ The APPC platform is the only one that lays out a comprehensive plan that can beat the climate crisis. Animal agriculture is a major contributor to the climate heating crisis and other catastrophic changes. We will challenge the major parties to address animal agriculture during the election.

We don’t have many elections left (probably just three) until we reach what scientists are calling the “tipping points” where nothing we do will stop the worst of the climate heating crisis.

To do that, your help and generosity are—as always—deciding factors.