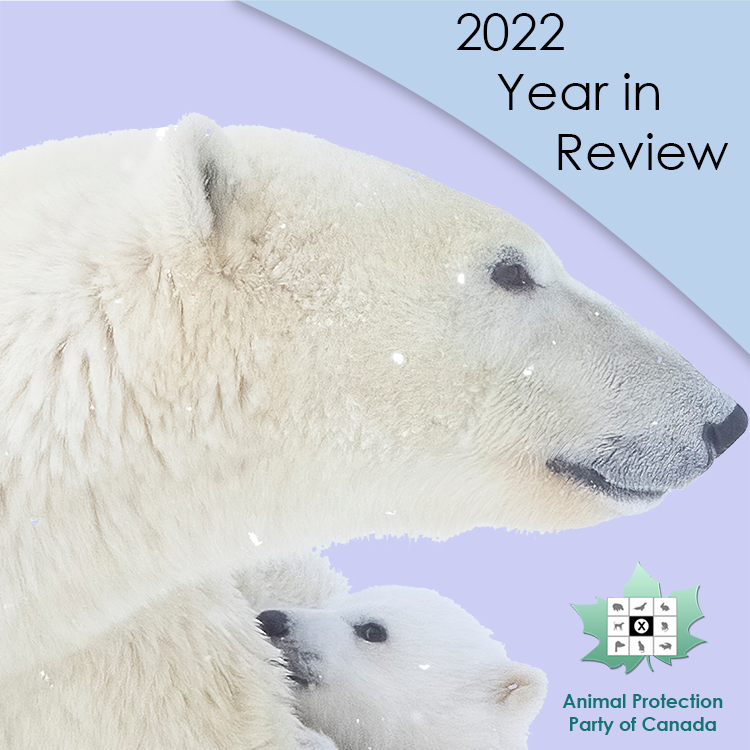 2022 has been a year of incredible growth and development for the Animal Protection Party of Canada (APPC). Even without a federal election taking place, we worked to hold the government accountable, pressed politicians for stronger protections for animals, and nurtured our political presence in Canada.

The presence of the APPC in Canadian politics is more important than ever, as no other party challenges the status quo, which led us to the climate crisis, biodiversity loss and widespread animal cruelty in the way we do.

From all the staff and candidates of the APPC, thank you for supporting our efforts to represent animals in politics and hold the government accountable. Together, we will keep fighting for a more compassionate Canada!

A Fatal Omission:  The government, through the Ministry of Environment and Climate Change, created a Federal Sustainable Development Strategy.  The strategy is intended to “[reflect] the Government of Canada’s sustainable development priorities, including achieving net-zero greenhouse gas emissions; conserving nature and biodiversity for future generations; advancing reconciliation with First Nations, Inuit and Métis communities; promoting gender equality; and, supporting innovation and economic growth”.  We wanted to ensure that addressing animal agriculture was on the agenda, given its impact on global warming, on human health and on animal suffering. We submitted a report during the public comment period entitled A Fatal Omission.  The report is available on our website should you wish to read it.  The report explained the science that demanded the government take action to lay out a place that would begin immediately to phase out animal agriculture in Canada.  It is a major contributor to climate change and without its reduction the government will not achieve its goal as set out in its Sustainable Development Strategy.  Unfortunately, the Ministry chose not to heed our advice and did not include intensive animal agriculture in its resultant plan.

Cosmetic Testing on Animals: When the federal election was called in 2019, S-214, the Cruelty-Free Cosmetics Act, was scrapped.  Work began immediately and continued up to and after the 2021 federal election.  In early 2022, APPC, Animal Alliance of Canada, and other members of our coalition of animal protection groups and industry representatives met regularly with the Minister of Health’s staff to develop wording for new legislation. They, just as seem regularly to do, told us how “important” a cruelty-free cosmetics act was to them and in fact, the Trudeau government included a commitment by the Minister of Health in his Mandate Letter to ban the use of animals in cosmetic testing in Canada. Everyone remains “hopeful;” yes, always hopeful that this time the legislation will be implemented and Canada will join with the forty countries have banned testing cosmetics on animals. 2022 was supposed to be the year this legislation was finally introduced.  Now we have to keep fighting to ensure 2023 is the year this legislation is successful and put an end to these cruel practices.

Double-crested Cormorants:  For years the APPC has opposed Parks Canada’s inhumane and unscientific double-crested cormorant cull on southern Ontario’s Middle Island (in Point Pelee National Park). Through documentation and campaigning we have been able to draw critical attention to the government for its mismanagement and wasteful policy. While the cull persists, we too persist to find new ways to hold the government accountable and will continue to work to end this annual slaughter of wildlife. We have produced extensive background information on this cull which will be posted on the Great Lakes Cormorants’ website.

Fighting the use of poisons:  In December 2020 the APPCC submitted a report to Health Canada advocating against the continued use of inhumane poisons, including Compound 1080, Strychnine, and Sodium Cyanide.  The report documented faulty and inadequate “science” that Health Canada relies on to justify the use of these poisons.  We have had a number of significant victories. Although these poisons were widely used across the country for years, Alberta remains the only province to continue.  In 2021, strychnine was banned use to poison Richardson Ground Squirrels and in early 2022, Sodium Cyanide was no longer allowed for use in Canada.  Most recently, we were excited to announce that in 2022 Health Canada, through the Pest Management Regulatory Agency, has deregistered a form of Compound 1080 from its approved list.  The product that is no longer legal to use is known as a “bladder” collar, worn by farmed animals.  In theory, when a farmed animal who wears this collar is attacked by a predator, the predator punctures this collar and dies. In practice, it is a gruesome death for the predator and deleterious to the environment since the ground absorbs any spilled poison.  There are also secondary deaths to “non-target” species who scavenge the dead bodies. This is a huge win for wildlife and we are glad that our report had a part in this change.

Military Trauma Training: The Animal Protection Party of Canada has worked for years to expose the hidden truths of the Department of National Defences’ animal testing practices that inflict brutal cruelty on pigs and other animals. While the majority of NATO countries have abandoned animal testing for more scientifically rigorous and evidence-based artificial models, Canada continues to hold on to the outdated practices of live experimentation. We have gathered significant evidence that will horrify anyone who cares about the treatment of animals and are preparing to hold the government accountable for this unjustified and unconscionable animal abuse carried out under the watch of the Minister of Defence.

Animal Victims of War: For the past seven years the APPC has been a part of the Animal Alliance of Canada’s Purple Poppy campaign to raise awareness of the animal victims of war. This year APPC candidates held commemorative ceremonies in Ottawa, Montreal, Toronto, and Victoria to acknowledge the tens of millions of animals who were used in war and to expose the continued use of animals in Canada’s military trauma training. These events are important to normalize the presence of animal lives within our culture and social discourse and also to challenge false narratives, such as animals being “heroes” of war.

International Women’s Day:  Instead of a commercial or public service announcement acknowledging International Women’s Day, we decided, in the spirit of the year’s #BreaktheBias theme, to ask that people consider female animals who are exploited in the agricultural systems.  We held a roundtable discussion, the video of which is available on our Youtube channel, and posted an article in which Liz asks “How can we consume them when we are aware of the suffering that this causes them? There is no greater bias than how humans treat non-human animals.”  We fight for women’s rights and now it is time to fight for female farmed animals and indeed for all animals.

Building APPC:  We have been excited to welcome a growing number of new candidates to the APPC this year. From across Canada candidates have been stepping up to be involved because they know there is so much work to be done to pass legislation that is desperately needed to protect all animals and our environment. No other political party in Canada challenges the status quo or the climate crisis in the way the APPC does.  We host regular meetings with our candidates to discuss the nuances of our platform, to answer questions and to hold mock debates, all in preparation for the next election.  While the date of the next election may still be a way off, now is the time to get involved if you are interested in being a part of the compassionate revolution for people, animals, and the planet.

We were equally pleased to be able to attend events in the summertime for the first time since 2019.  Nothing compares to connecting with each other in person!  We had candidates Irene Kaye table at the VegFest in Burlington (Ontario), Kimberly Lamontagne in Montreal (Quebec) and Debra Wall in Winnipeg (Manitoba).  Our deputy leader, Jordan Reichert, was invited to speak at the Winnipeg VegFest, which was a fantastic opportunity to encourage people to become political for animals.  We were also present at the International Vegan Film Festival, another occasion to promote political involvement on behalf of the animals.

Fighting for Proportional Representation:  Over the last two years we contributed $20,000 to the efforts of Fair Voting BC and Springtide to bring forward a Charter challenge against the government for its continued use of an undemocratic First-Past-the-Post electoral system in Canada. As has been argued since the 1970s, a proportional representation electoral system would ensure fairer representation based on the preferences of voters in elections. In many cases, the vast majority of votes across Canada are wasted because a candidate wins as long as they have a simple majority over all other candidates. This means most voters effectively have no representation despite being part of the majority.

As Fair Voting BC states, “Governments of various stripes have supported electoral reform while in opposition, and on the campaign trail only to back away from the promise of reform once elected.  The present government and parliament have decided not to proceed with electoral reform. It could be years, or decades, and several elections, before electoral reform becomes a possibility again. Democratic rights are human rights. It’s the Supreme Court’s job to ensure that those rights are protected when parliament neglects to protect them.” The goal of the court case is to have the Supreme Court rule that the current voting system contravenes the Charter and to have the Supreme Court order the government to adopt a voting system that complies with the Charter.

Working with International Animal Parties:  We are always incredibly proud to be a part of a much larger movement of animal parties beyond Canada.  From Australia to the Netherlands, there are over 20 animal parties with many having elected members in their parliaments.  They are able to get important policies for animals and the environment in motion.  This includes phasing out animal agriculture by buying out farmers and installing video cameras in slaughterhouses. Together, we support each other through success and failure, and share knowledge on how to make ourselves stronger as candidates and political parties.

Building for the Future:  In 2023 we will continue to reach out to like-minded people and build a greater APPC presence across Canada. We have been working on a few things that we are sure will get people excited when they are announced. Until then, thank you for your ongoing support for North America’s first and Canada’s only political party for people, animals, and the planet — the Animal Protection Party of Canada.

Please donate to support our continued work as Canada’s only political party for people, animals, and the planet!