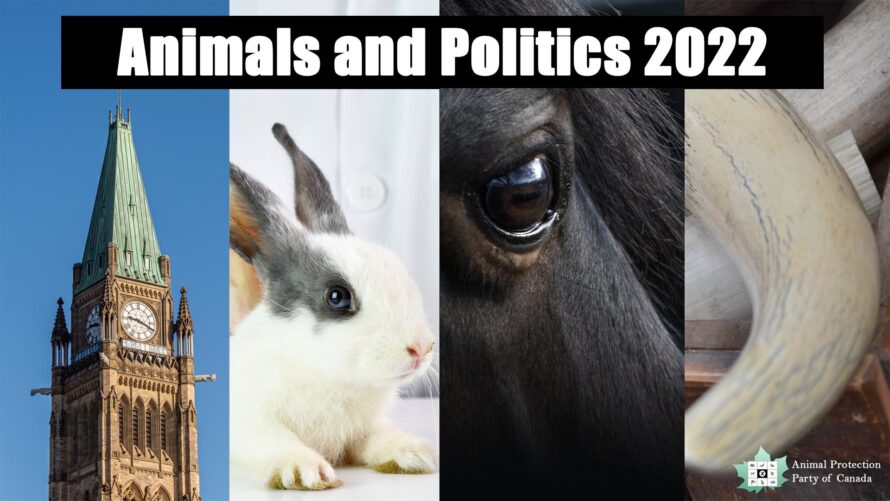 For humans, 2021 has been a year defined by the persistence of the pandemic. As vaccinations rolled out globally there was much optimism earlier in the year that we would see the end of widespread health and social policy restrictions to curb transmission, but with the rise of the Omicron variant, it feels like we are starting 2021 over again.

For animals, the world political leadership has done little to improve their plight. While there have been small successes, overall, the number of animals dying, loss of biodiversity, and destruction of habitat continue unabated.

This year, we had an impromptu federal election that continued the pattern of uncertainty and followed the repeating trend of the pandemic. A minority Liberal government attempted to capitalize on the wave of early optimism surrounding national vaccination efforts and called an early fall election. However, despite vaccination efforts the pandemic was not through dashing the dreams of a return to normal. This resulted in an expensive election that ultimately achieved nothing, with almost no change in seat count between the mainstream parties.

An exception to the usual election rhetoric was the prevalence of animals in the Liberal and Conservative mainstream platforms. From promises to ban the live export of horses out of Canada for slaughter, to ending puppy mills, politicians used animals to garner support in a way previously unseen in Canada. Unfortunately, with a minority government still in place, it is unclear whether or not there will be enough incentive for elected parties to cooperate in passing animal friendly legislation before the next election.

As for the Animal Protection Party of Canada, the election was another opportunity for us to introduce voters to our platform as the only party in Canada fighting for people, animals, and the planet. Due to the pandemic, we ran fewer candidates than in the 2019 federal election, but we were able to share our urgent message of the need for politicians to address the climate crisis through an animal inclusive approach and hold them accountable for their lack of action to date.

With 20 animal rights political parties globally and growing, the Animal Protection Party of Canada is far from alone. Their unique presence in their political systems has enabled progressive legislation to be passed improving the status and treatment of animals globally.

In the Netherlands, a law was passed that makes the natural behaviour of animals’ paramount in welfare considerations and animals must not be adapted to the system they are raised/killed in, which allows for banning cruel practices such as tail docking on pigs.

In the UK, animals have been recognized as sentient beings and new laws must take this into consideration moving forward through an Animal Sentience Committee.

Australia, ban on breeding programs for dolphins, whales, and porpoises used in entertainment.

Portugal, ban on the live shooting of birds for sport

Cyprus, establishment of a special police to address animal abuse.

This is just a small sample of what can and has been achieved globally over the past year for animals in politics. It makes us wonder when Canada will catch up and start making animals a priority.

One of the key components to creating more opportunities for diversity of representation and inclusion in our political systems is through our electoral systems. While we have a first past the post system in Canada that promotes a winner take all, less cooperative approach, most of the world uses various forms of proportional representation (PR). Compared to First-Past-the-Post (FPTP), PR tends to be more representative of how people actually vote because more of the votes are counted and seats more equally distributed based on votes that would otherwise be unused under FPTP.  Every country with elected representatives of the global animal parties has some form of proportional representation in their country’s parliament.

Fair Vote BC is currently engaged in a constitutional challenge with the federal government over the use of FPTP and the Animal Protection Party of Canada is proud to support their challenge financially. A successful challenge could see a PR system implemented federally in Canada and give the Animal Protection Party of Canada a greater opportunity for success in electing our candidates to fight for animals in parliament.

We have been receiving many applications since the election was called, and after, by people interested in becoming candidates for the party. It has been inspiring to meet them and hear of their passion for challenging the status quo, bringing animals into the conversation, and holding political leaders accountable for their lack of action for people, animals, and the planet.

We are continually accepting applications to join the party through this form on our website. You will then be contacted by someone on our executive team to do an interview to learn more about how we can help you realize your political goals with us for animals and the environment.

There is a great deal of uncertainty heading into 2022 for animals, people, and the planet. Our current economic system continues to undermine the ecological integrity of the planet at an alarming rate and politicians from around the world failed to inspire any confidence in their ability to collectively address this existential threat at COP26.

However, the federal Liberals have signaled that they are at least taking seriously some moderate animal welfare policy. Their recently released ministerial mandate letters outlined objectives that the government hopes to achieve in its term and, surprisingly for the first time, they include animal issues.

The three issues that made the cut are:

However, with a minority government the expectations of the inclusion of these animal welfare policy changes needs to be tempered. Ending cosmetic testing on animals was a bill (S-214) that sat in parliament a long time previously and the liberals failed to pass it when they had a majority. Banning the live export of horses for slaughter is probably the most high-profile issue right now, thanks to the campaign by the Canadian Horse Defence Coalition and Jann Arden, so that would be the most likely place to see movement. Meanwhile, the curb on the wildlife and ivory trade are welcome, but somewhat vague in scope.

This does leave us with the question of why the government continues to ignore the abuse and suffering of the 800 million animals in the agricultural system, destruction and loss of wildlife and their habitat, and increased animal use numbers in animal experimentation. This does not include a lack of regulation of animal use industries, little public oversight of animal law enforcement, and animals still being defined as property in the Criminal Code. While animals may be on the agenda, their status is still marginalized enough that government is mainly focusing on policy that has little economic consequence over larger systemic issues of cruelty and suffering.

While there is reason to be underwhelmed, we should be optimistic that these changes are even being considered by parliament. For over a century, animals were barely mentioned in politics, now they are a part of mainstream party platforms. What we need to do in 2022, is keep fighting for more and at every level of government. Animals are a part of the political discourse and the lies that once protected the interests of animal-use industries have been exposed. If we can continue to show how the climate crisis, environmental destruction, and social well-being are connected to the lives and interests of other species beyond humanity, maybe we can still save the planet and ourselves.