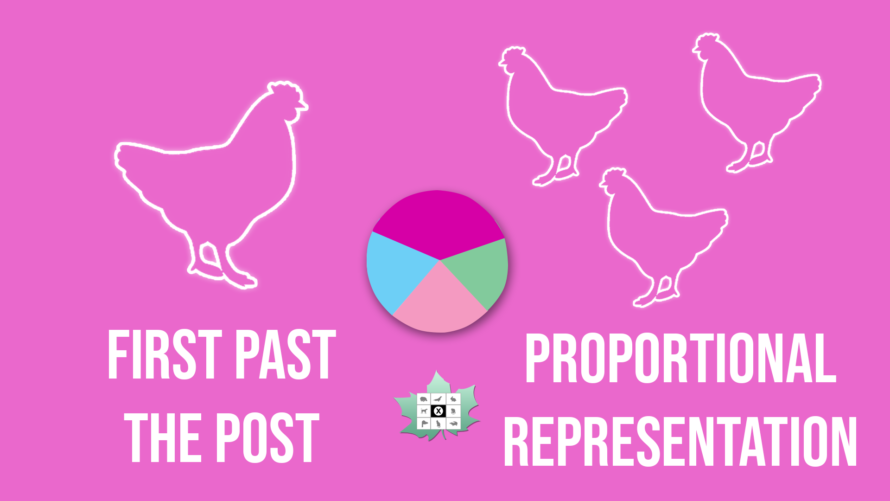 A fight by Fair Voting BC and Springtide to make Canada’s electoral system more representative has been quietly brewing for the past four years. It has the potential to change how politics is done in Canada and bring animals into our political discourse like never before. Let me tell you how this fight for Proportional Representation (PR) started and why it is so important to our collective future.

Politicians are known for making promises they don’t intend to keep, but voters were still hopeful when Justin Trudeau announced in his 2015 victory speech that it would be the last election under our unrepresentative First-Past-the-Post (FPtP) electoral system. Unfortunately, once a Party has virtually absolute power through a majority government as the Liberals did at the time, it is very difficult for them to give up that power even for a more democratic system. Despite cross-country public engagement on the issue, the Liberals dropped electoral reform from their mandate before the 2019 election.

The controversial nature of FPtP is its simple majority requirement. For example, in federal elections a number of candidates from the various parties and independents could collectively have sixty percent or more of the vote. However, if only one candidate receives the other forty percent, they are declared the winner because they have more votes than any other one candidate. For voters, this means that although the majority of them didn’t vote for the winning candidate, that candidate is now their representative in Parliament. All the votes that didn’t go to the winning candidate, some sixty percent of votes, are wasted because they do not receive any representation.

In a proportional electoral system, of which there are a variety of different kinds, those other votes, from the example above, are generally redistributed in a way that still provides some representation for the votes cast which are not held by the candidate with the highest individual percentage. For voters, this means that even if one candidate wins with a minority of the total votes, the remaining votes will still be counted towards a second, or multiple, representative based on the proportion of votes they received. This provides more opportunities for voters to have a diversity of representation and can encourage greater cooperation between Parties.

In response to Trudeau’s failure to follow through on his election promise, Fair Vote BC and Springtide started building a campaign for a Charter of Rights and Freedoms challenge on the constitutionality of our FPtP electoral system.  As they point out, the Charter provides specific protections for all Canadians, including the right for us to vote and be treated equally. However, the question that Fair Vote BC is posing to the courts is whether these rights are violated under a FPtP system which can effectively invalidate a majority of the votes cast when one candidate wins by a simple individual majority.

This is why Fair Voting BC and its allies believe a Supreme Court Charter Challenge could legitimately show that FPtP is a violation of voters Charter Rights. The Animal Protection Party of Canada agrees with Fair Vote BC’s assessment and is proud to be a financial supporter of the Charter Challenge, as we see it being in the interest of all Canadians and non-human animals to have a proportional representation electoral system.

Around the world, the vast majority of countries use a PR system and where animal rights political parties run in countries with proportional electoral systems this enables them to be successful. People do want animals and the environment on the political agenda and when they are empowered by having the ability to vote for multiple representatives to show their diversity of political interests, they will use that opportunity to improve the diversity of political representation. This has helped improve animal protection legislation in many of these countries, including phasing out animal agriculture in the Netherlands, as the animal parties work with the mainstream parties to achieve their goals.

While the fight for Proportional Representation at the federal level still has a way to go, we believe that the courts are the ideal way to hold the government accountable to the electoral interests of human and non-human animals. Governments in power and mainstream political parties have too much influence and power to lose to be strong advocates for making our electoral system more democratic. They are threatened by the power of smaller political parties which seek to expand the diversity and inclusivity of representation in Canadian politics. It is long overdue that this power dynamic changed.

Proportional Representation is about creating a more responsive political system that can address the climate crisis, biodiversity loss, and social injustice at every level of government in Canada for people, animals, and the planet. It is an essential component of compassionate politics that every voter should fight for.

Please donate to help us continue to support this important court case.