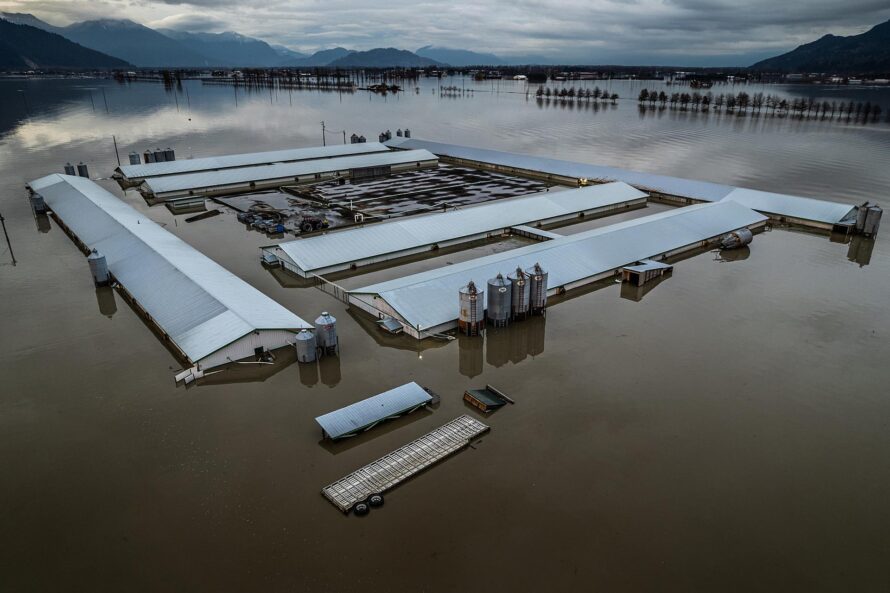 Most of the time, the abuse and deaths of hundreds of millions of animals raised and slaughtered for food within our agricultural system are hidden from view, only to be exposed intermittently through undercover footage that shows the true suffering in our food system. However, when this system is disrupted by barn fires, flooding, disease outbreaks, or other natural and human caused disasters the vulnerability of animal life is made disturbingly public.

With the climate crisis causing more frequent and devastating natural disasters across Canada and in B.C., domesticated farmed animals are disproportionally vulnerable to the consequences of these events as there is seldom a contingency plan in place for their safety. This vulnerability was tragically on display over the past couple weeks in British Columbia, as extreme weather caused catastrophic flooding. The fear, anxiety, and death of chickens, cows, pigs, and sheep have been exposed publicly as tragic videos and images across the news communicate, in real time, the struggle of the animals as flooding drowned and stranded hundreds of thousands of them in B.C.’s Sumas Prairie region of Abbotsford.

According to Lana Popham, B.C.’s Minister of Agriculture, 2.2 million chickens and other birds, 25 thousand cows, 3000 pigs, and 2000 sheep were affected by the flooding. While, numbers of dead animals are unclear at this time, it is certain that hundreds of thousands of deaths, most likely as a result of drowning or hypothermia, will be expected. Updated: New numbers show, 640,000 chickens, 12,000 pigs, and 420 cows died, but this number could grow further.  Earlier this year, over 400,000 chickens died during the heat wave in B.C.

Not all the animals were abandoned by the farmers responsible for them. Amidst the chaos, media outlets have displayed images of farmers attempting to rescue their cows, some pulling them with jet skis to land. There were also images of the Canadian Armed Forces being brought in to help remove chickens stranded on farms who had gone days in horrific cramped conditions without food or water. The military transferred them to boxes where they will likely only be moved to suffer in a farm somewhere else, soon to be slaughtered.

Perhaps the statement of Abbotsford mayor Henry Braun summed up the general sentiment of the emergency response best when he said, “I know it’s hard for farmers to leave their livestock, but people’s lives are more important to me right now than livestock or chickens.”

For farmers, the animals they raise and slaughter are their livelihood. However, we shouldn’t confuse their attempts to protect the value of their animals as commodities with an act of rescue. For the cows, chickens, and other animals who survive this natural disaster will not be saved from the violent system they were born into, they will be slaughtered. The temporary facilities they go to now will likely be little different than the previous, and if the recent B.C. dairy farm expose is any indication of the status quo of how animals are treated in the agricultural sector, they will face more abuse and torment before they are liberated by death.

This raises the question of what could be done differently? The most obvious answer to many may be to use technology to mitigate the potential for flooding, something long considered by Abbotsford in relation to the Nooksack river overflow, which pushes water north to B.C. from the U.S., causing flooding. Or something more extreme and unlikely, such as re-establishing Sumas Lake that was drained to create this agricultural land in the first place. However, if the provincial government is at all concerned about the suffering of the animals, more than just flood mitigation, we must also consider that the vast majority of animal suffering could be alleviated if we transitioned this part of the agricultural sector with plant-based agriculture.

Not only do plants help absorb water, they have a smaller ecological footprint and are easier to replace, they are cheaper to produce and to harvest, and while it may still be a travesty to lose a crop to disaster, they do not suffer needlessly as our animal cousins do. Practicing bio-cyclic veganic farming methods could also help retain wild spaces, or rewilding sections of agricultural land, to encourage biodiversity of flora and fauna which can further contribute to mitigating flood risks. Aside from bringing back the lake, helping these farmers transition to a plant-based agriculture is the best opportunity to promote a healthy, sustainable, cruelty-free and resilient food system.

All of the climate driven disasters we face and will continue to face more frequently due to inaction from government are opportunities to change how we live, eat, and relate to the natural world. It is about a cultural shift in our thinking and meaningful investment in resources and people who want to be a part of the plant-based revolution.

The thousands of animals who were lost due to the floods and the hundreds of millions more that are killed every year in our food system deserve a better way forward, a plant-based future is it.