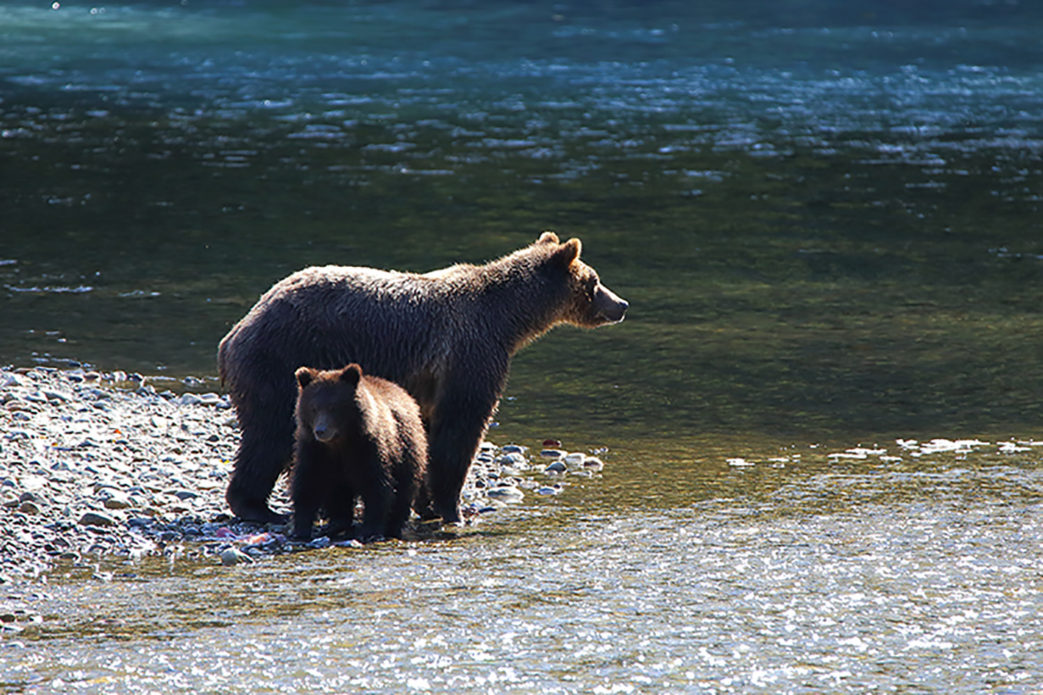 Yesterday evening, I attended an event in Victoria organized by the newly formed B.C. grizzly bear advocacy group, the Grizzly Bear Foundation.  Approximately 60-80 people attended their “board of inquiry” event, which while sounding like a government lead inquiry, unfortunately does not have the same direct link to our politicians.

After a preamble about the intent of the meeting and introduction of the board of inquiry members, community members and organizations had the opportunity to speak about their thoughts on the B.C. grizzly population.  There was an easy consensus that the grizzlies needed to be protected with particular opposition to trophy hunting and ongoing habitat destruction.

However, while I listened to speaker after speaker condemn the trophy hunt and the governments lack of action to properly protect grizzly habitat, a theme emerged that caused me great concern.  Almost every individual who spoke was framing the grizzlies as an economic resource.

This may seem inconsequential considering the dominant discourse perpetrated by the government is in this vein.  It is the Ministry of Forests, Lands, and Natural Resources Operations who oversees wildlife in BC.  Yet, for those who are condemning the unethical practices of trophy hunting. How does the economic objectification of grizzly bears for tourism or otherwise give moral worth to these individuals as worthwhile for themselves and not just for human interests?

Jordan Reichert AAEV speaks at the Grizzly Bear Foundations board of inquiry meeting in Victoria, B.C,

As an example, there were grizzly sightseeing operators presenting who expressed a keen interest in expanding their operations by, what sounded like, gaining access points currently occupied by the trophy hunting guide outfitters.  One operator commented that their business sees roughly 35,000 tourists come through their lodge each year and that they could see that number increasing by ten times if the government would work with them to expand their business.  That is 350,000 tourists watching bears each year, in what we were told is a “self-regulated” industry.  While the audience was told that this is a neutral impact industry that makes sure the bears are not exposed to people more than 40% of their lives, it seems hard to fathom how under a capitalist economic model of continued growth and expansion into bear territory that this suspicious “neutral impact” could be maintained.

While I am not opposed to the idea of “eco-tourism” per se.  It seems precarious to put our faith in protecting the lives and habitat of grizzlies wholly in an economic model of questionable conservation.  It is a problem because without proper industry regulation of the industry, everyone will be looking to get a piece of the pie.  That does affect grizzlies and their habitat directly.  Similarly, while language such as “neutral impact” are used to describe the effect this type of tourism has on the grizzlies themselves, this is an oxy-moron of sorts.  There is an impact, we just don’t know how big that impact will be. In this context, we have to be careful that we don’t turn the Great Bear Rainforest into a wild zoo where the animals are free, but are always made to feel as though they are being watched and surrounded.

Another speaker mentioned that the elephant in the room for the loss of grizzly populations in B.C. and abroad is habitat destruction.  Habitat loss has significantly and negatively impacted grizzly populations; however, we have to look deeper at the mentality that allowed the habitat destruction and abundant hunting of grizzlies to continue unabated with relative indifference.  My response was that the real elephant in the room was that human interests almost always trump even the most urgent to need to protect wild animals and their habitat. Without addressing colonial and speciesist cultural attitudes we would not be able to meaningfully address the exploitation of these individuals.

Grizzlies, deer, geese, wolves and other wild animals continue to be exploited as commodities and slaughtered as pests.  They must become more than expendable property that the Ministry “sells“ to the highest bidder or the loudest interest.  If grizzlies and other non-human animals are to be considered and protected for their own interests, then we must act without the pressures of personal gain.  These are individual beings who suffer and feel pain. We celebrate them through their beauty and unique modes of self-expression.  We understand that they have relationships, family structures, fears, joy, interests and curiosity.  We might call this culture, or a way of life.  However we describe it, they deserve to be protected, not hunted down for sport or on display for tourists.  They deserve to be free from our oppression, whatever form that takes.  Let’s acknowledge them as deserving independence from our exploitative systems and let the fight against their oppression be our guiding force in advocating for them.