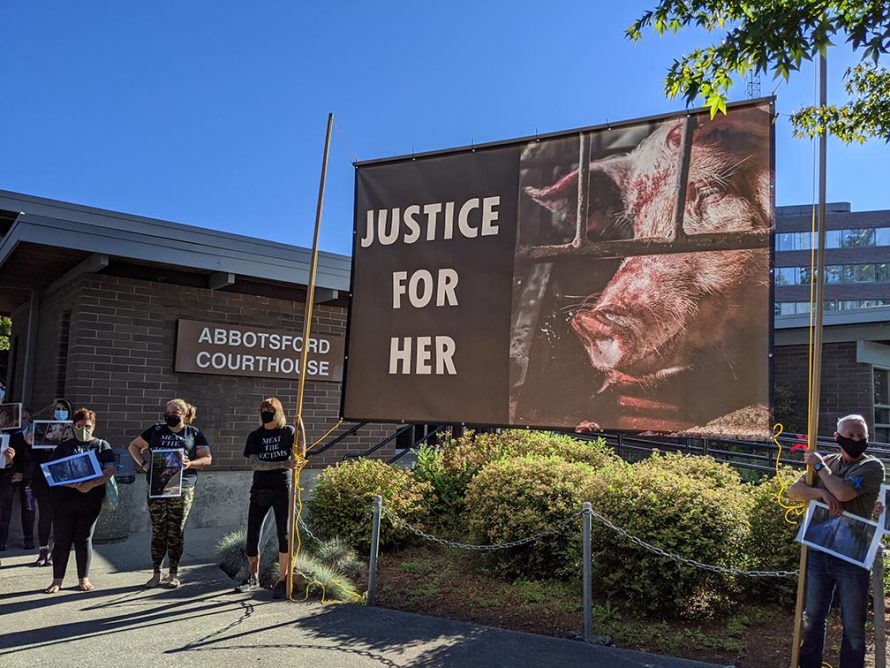 On April 23rd 2019, PETA released a video that was taken at Excelsior Hog farm with hidden cameras in Abbotsford B.C. This video depicted sick, dead and dying pigs in crowded and filthy conditions, with some of the living eating the dead. It also showed piglets being castrated without pain relief.

On April 28th, 2019, hundreds of activists participating in a Meat the Victims event descended upon Excelsior hog farm in Abbotsford, B.C. to expose and raise awareness of the documented animal cruelty taking place within its walls. About 70 activists went inside while over 150 held signs and sang peacefully from the public roadside in support of those who entered.

Those on the inside endured a traumatizing day witnessing the cruel reality of the animal agriculture system first-hand: they reported seeing pigs dead and dying, suffocating confinement and dense crowding, and what to them appeared to be undoubtedly physically and psychologically injured pigs. Nothing in the barn was unexpected. Yet it was impossible to emotionally prepare those who witnessed the enormity of suffering before them.

Everything was documented and live streamed from the day, so that there can be no question about the source of the footage. This footage verifies previous footage released by PETA.

The BC SPCA reported to media that they were investigating the farm, however they declined to forward a recommendation of charges to the Crown without anyone stepping forward to take responsibility for the video or to guarantee its location.

In response, activists released additional footage caught by hidden cameras where more instances of animal cruelty could be viewed including workers castrating piglets seemingly without pain relief, using electric prods on the face of pigs, as well as physically kicking and hitting pigs.

The whistleblower, willing to expose themselves in order for the BC SPCA to pursue animal cruelty charges, came forward to the BC SPCA. The whistleblower was told that they would not be turned-in unless there was a warrant or there name was needed to pursue charges. In return, the BC SPCA provided the whistleblower’s name to police without a warrant and without referring charges to the Crown, and the whistleblower was  charged. On the BC SPCA’s website regarding remaining anonymous it states, “All of our calls are confidential and the only time your information could be released is in the event of a court order, legal proceedings or if we ask you to provide a statement so that we can obtain a search warrant.”

There is a petition you can sign calling on the BC SPCA to charge Excelsior Hog Farm by our APPC candidate Kira Cheeseborough here.

You can support the GoFundMe for the accused in PigTrial #3 here.

At this time, there is no evidence that the BC SPCA has recommended charges to Crown Counsel, instead claiming that because the video was obtained illegally the evidence will be ruled inadmissible. However, as of this writing the BC SPCA has not revealed who at Crown Counsel made that decision or when this alleged conversation took place. Without the charges being submitted to the Crown to review the evidence, it is unclear how they could make this assessment.

It would seem to be that the BC SPCA not only betrayed the trust of the whistleblower in this case, but also the general public.

The BC SPCA is a charity.  It is granted special powers, through the Minister of Agriculture, by the province of BC under the Prevention of Cruelty to Animals Act (PCAA) to enforce animal cruelty laws.  In this respect, the BC SPCA is entrusted with an enormous task: a remarkable responsibility to ensure that public laws are enforced with accuracy, transparency and accountability. In addition to the BC SPCA, the police and the RCMP are also able to enforce animal cruelty laws as listed in the PCAA and the Criminal Code of Canada; however, these agencies tend to rely on the BC SPCA to respond to animal related complaints and rarely pursue animal-related charges, despite having more resources at their disposal.

It is also important to remember that because the BC SPCA is a charity it does not have the same obligations of accountability and transparency in their conduct and operations that the police or RCMP do. A member of the public cannot do a Freedom of Information (FOI) request to collect information or data from the BC SPCA. They are also not subject to the Protection of Privacy Act (PPA). If you file a cruelty complaint with them, you are not entitled to any information regarding how or if they proceeded with that complaint. In the same regard, the public is not able to measure if our laws within the PCAA are adequate to protect animals in this province. We have no way to assess the weaknesses or strengths of this legislation or changes needed to better serve animals. The only way to assess the legislation is to require transparency and accountability of the BC SPCA through FOI’s and PPA’s but as long as the BC government relies on the SPCA agency to fund cruelty complaints from their donors, the conflict of a private charity enforcing public laws cannot be reconciled.

Further, because the BC SPCA has relationships with the animal agriculture sector and can receive donations of any size from anyone, there is potential for a conflict of interest in enforcing the law when it comes to the most prolific perpetrators of animal cruelty and suffering in the province.  The only reason that the BC SPCA’s conduct in regards to sharing the name of the whistleblower to the police was exposed is because of the evidence related to the case. However, the question remains how their conduct can be properly scrutinized if the only time the public can access any information about them is through their curated content or legal filings.

It is time for the provincial government to take responsibility for animal law enforcement across B.C. By doing so, it will be able to provide the necessary resources to properly investigate, lay charges, support staff, and ensure a higher degree of accountability and transparency. This is a tremendous opportunity for the BC SPCA to step back from its role as enforcer of the PCAA and focus solely on where its strength lies as a rescue, rehabilitation, and education organization.  This will unburden them of the responsibility they honourably accepted, but should have never have had to bear as a charity without the necessary resources to fulfil its duty in the interests of animals and the public.

We need an overhaul of our law enforcement system as it serves animals.  It is unacceptable and possibly unconstitutional to have laws pertaining to animals, or any other laws, enforced by a charity which is exempt from mechanisms of public accountability and transparency essential to the responsible use of such power. The law is the law precisely because we have a collective interest in it being enforced equally and equitably amongst us.  Having a two-tier system marginalizes the enforcement of the law to protect animals and undermines this principle.

Last year, the province of Ontario took over enforcement responsibilities from the Ontario SPCA after a court challenge found it unconstitutional for a charity to be enforcing animal cruelty laws. Although this ruling was overturned, Ontario went ahead with establishing a provincial animal law enforcement body under the Provincial Animal Welfare Services Act (PAWS). This is the first agency of its kind in Canada and while it is yet to be seen how effective it will be in place of the old system, it takes the important step of removing law enforcement from the hands of a charity.

Some of the fundamental differences are that as a publicly funded provincial body, the new animal enforcement agency will be more transparent through the opportunity for FOI requests and accountable by mitigating some potential for conflict of interest arising through enforcement priorities that may be tied to funding and industry relationships. The new system will not be without deficiencies in these areas as there always is with government, but unlike a charity, this provincial body is tied to the funding choices and legislation established by politicians who can be held accountable themselves during and in-between elections.

The future of the enforcement of animal laws must be in the hands of the public, not a charity.  This is an essential step for us to recognize animals as valued members of society and not private property people can dispose of and mistreat with impunity. We have a tremendously long way to go to improving the status and treatment of animals in our society and every animal whether in our homes, in the wild, or on a farm deserves the same protections. Even more so, the enforcement of such laws that do exist in the interest of animal welfare as determined by democratic processes must be properly funded to ensure their full realization in the public interest. We will not get there with a law enforcement by donation strategy. Let’s start by at least making those protecting animals accountable under the law, even if the animals themselves are not yet treated equally under it.

Donate to help us continue to fight Ag-Gag legislation across Canada!