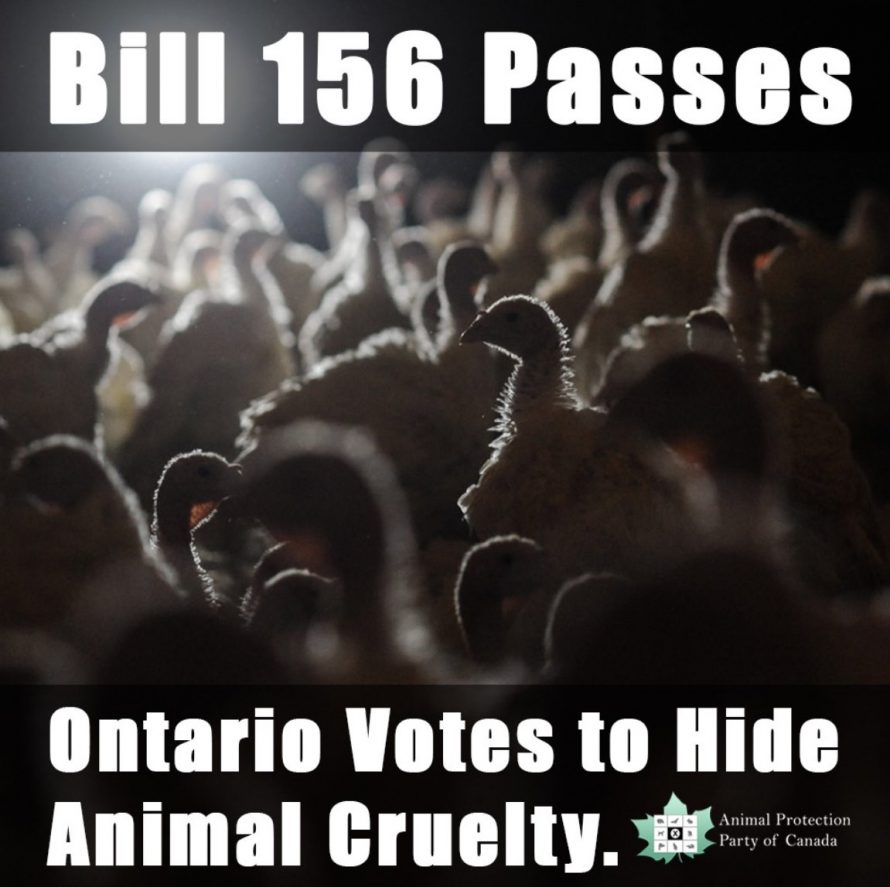 BREAKING: Ontario has voted to hide animal cruelty on farms.

The Ontario Progressive Conservative Government has just passed Bill 156: The Security from Trespass and Food Safety Act, without amendments to the ag-gag component.

Bill 156 passed with 68 votes in favour, and 22 opposed. You can see the breakdown of how each Ontario MPP voted here. You can find your local MPP here if you want to contact them about how they voted.

While Bill 156 is provincial legislation, it will have a national effect on other provinces’ interests to pursue similar ag-gag legislation in their regions. Thus, it is an issue of federal importance that must be addressed and opposed at the federal level of government.

The Animal Protection Party of Canada will be seeking opportunities to challenge Bill 156 on the grounds that it is a violation of Charter rights and that it will unreasonably limit the legitimate exposure of systemic animal cruelty for public scrutiny. We will also continue to fight to ensure that animal cruelty remains a central focus of debate on this issue. Animal suffering has been largely ignored by MPP’s in Ontario both opposed and in support of Bill 156.

Help us keep fighting against Bill 156 by donating at the link below: https://www.animalprotectionparty.ca/donate/

Below you can see APPC Party Leader, Liz White’s submission to the Standing Committee on General Government on behalf of the Animal Alliance of Canada.

My name is Liz White, Director of Animal Alliance of Canada.  Animal Alliance has been fighting for animals and the environment for 30 years.  We strongly recommend to Premier Ford, Minister Hardeman, this Committee and the government to withdraw Bill 156. The Bill’s clear intention is to muzzle employee whistleblowers, investigative journalists, and others who may observe animal abuse and in doing so violates their rights of freedom of expression under Section 2(b) of the Charter.

The Bill lacks clarity as to who can and cannot report concerns about the condition in which farmed animals are kept including veterinarians who many not have the consent of the owner/occupiers to “report abuse, undue physical or psychological hardship, privation or neglect” as required by the PAWS Act.  Bill 156 certainly has a chilling effect.

With regard to trespass, the government already has the Trespass to Property Act.  As far as I can tell, no trespass charges have been laid against individuals who have entered Ontario farms.

As the Minister stated in a February 26, 2020 interview with TVO’s Steve Paikin, “I think we all need to understand the present trespassing law has the same authority…”

So, if that is true, why create a new piece of legislation when one already exists?  Why not use the Trespass to Property Act to achieve the same goal?

The answer appears to be in Section 4, subsection (6) and Section 5, subsection (2).  I will confine my comments to section 4.

Section 4, subsection (6) is designed to prevent investigations conducted by journalists or another entity such as the group, Last Chance for Animals (LCA).  In 2018, the group conducted an undercover investigation into a goat dairy farm in Caledon Ontario.  This investigation documented conditions of neglect and cruelty. The video footage showed goats crawling on their knees from overgrown hooves and goats with lesions and infections.  LCA laid a complaint with the OSPCA, the OPP and OMAFRA.

The Minister, the OPP and the OSPCA were all seemingly unaware of the neglect and abuse documented in this investigation.  Since the Ministry does not conduct on farm inspections, under Bill 156, the unacceptable condition of the animals would have continued unreported because such an investigation would be illegal.

In the same TVO interview, the Minister states, “If someone believes something is happening inappropriate behind the walls, call PAWS.”

In this case, it seems that no-one on the inside complained.  It took an outside organization to document the condition of the animals and seek intervention on their behalf.  Why would any government not want to ensure the proper treatment of animals in circumstance documented by Last Chance for Animals?  Why would any government want to hide or cover up such conditions from Ontario residents and taxpayers?

Under more normal circumstances, the government provides us with very little information about the conditions under which farmed animals are forced to live.  Occasionally we get a glimpse into the industry as happened during the 2-year trial between the Canadian Food Inspection Agency and Maple Lodge Farms where both broiler chickens and spent hens died in large numbers during transport to slaughter.

Now Ontario is dealing with Covid-19.  The virus has exposed vulnerabilities in our society including in nursing homes, shelters for homeless folks, workers in slaughterhouses and now we are beginning to hear about migrant workers.

What is not being discussed is the fate animals on farms, stockyards, auction barns during the Covid crisis.  How have animals been impacted by the closure of such facilities?

I have not been able to find any Ministry reports as to what is happening to the animals whose slaughter dates have been suspended due to plant closings.  Are there situations in Ontario where farm animals are being killed in large numbers due to the effects of Covid-19 and if so how are they being killed?

The fact that Ontarians currently do not know what is happening on farms is deeply troubling.  The intent of Bill 156 is to further suppress information about how farmed animals are forced to live.

Please withdraw Bill 156.  You will not succeed in keeping the conditions of farmed animals a secret.  Animals have the right to live their lives free of pain and suffering.  They deserve to be considered sentient beings not production units.  Ontarians – taxpayers – have the right to know what happens to animals on farms.