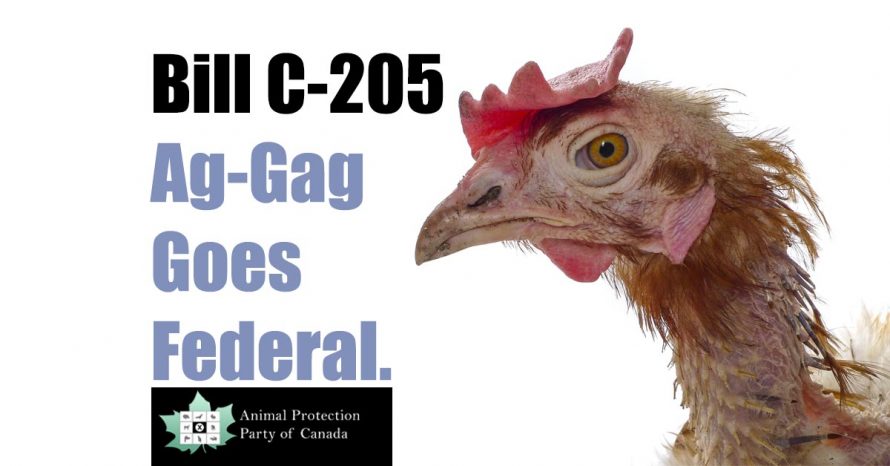 The wording of the bill was couched in the rhetoric of protecting the health of animals and workers in farms and slaughterhouses. However, it is clearly a federal extension of the provincial ag-gag legislation. Bill 27 passed in Alberta late last year and Bill 156 is currently being debated in Ontario. (Bill 156 has now been passed in the Ontario Legislature.) Bill 205 would make it an offence under the Health of Animals Act for animal activists to perform civil disobedience occupations of farms or slaughterhouses.

1 The Health of Animals Act is amended by adding the following after section 9:

Exposure of animals to disease or toxic substance

“No person shall, without lawful authority or excuse, enter a building or other enclosed place in which animals are kept knowing that or being reckless as to whether entering such a place could result in the exposure of the animals to a disease or toxic substance that is capable of affecting or contaminating them.”

Animal activists seeking to raise awareness of the cruelty inherent on modern farms, feed lots, and slaughterhouses are clearly the target of MP Barlow when he writes on his website:

“Recently, more and more individuals have been trespassing on farms and food processing centres. This has the potential to cause massive biosecurity issues for animals and the individuals who work with them.”

The Animal Protection Party of Canada is fundamentally opposed to Bill C-205.  The rule of law must apply equally to all, including those who raise and slaughter animals for food or otherwise. Laws against trespassing already exist.  Yet, Bill C-205 specifically seeks to target those trying to peacefully expose the reality of the animal use industries that cause systemic cruelty and suffering to animals daily.

While politicians try to appease special interest groups from the animal use sector, they continue to ignore the plight of hundreds of millions of animals in Canada each year.  No bill has been ever been passed in the House of Commons or the Senate that would protect animals farmed from abuse and exploitation in these profit driven industries.  In fact, it took decades to reduce the transport to slaughter times of farmed animals and even after the times were only marginally reduced, the government allowed industries an extension of 2 years to comply.

At this point, Bill C-205 has only had its first reading in the House of Commons and has not passed any votes.  We are going to work to ensure this bill does not pass, but we need your help to make that happen.  One of the most important things you can do is contact your Member of Parliament and tell them that you do not support Bill C-205 and ask them not to either. You can find your MP here.

You can also donate to the Animal Protection Party of Canada, Canada’s only political party for animals, here and help us fight this unjust legislation.