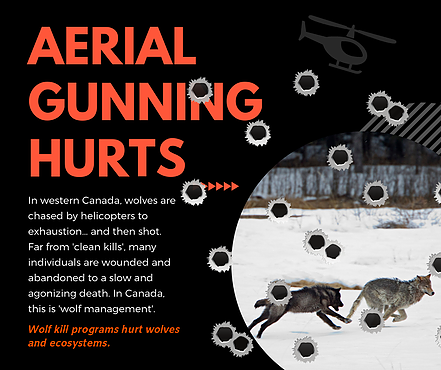 Jan 8, 2019 — In a short time men and women will get into helicopters carrying guns before drenching the ground in the blood of native wildlife as BC’s wolf cull is expanded.  The action, which includes tactics such as Judas wolves, the annual repetition of the slaughter, and a decided unwillingness to target human activities that are root causes of the caribou decline ensure that the province’s current running tally of 476 individual wolves killed will skyrocket.

Experts on wildlife management decry the move, which is being done without any discussion on decreasing snowmobile access in winter ungulate areas or reducing logging and pipelines in protected areas.  In a presentation given recently by Dale Seip, the province’s lead researcher on caribou conservation, the major underlying issue is the clearing of mature forests.

“We’ve disrupted this natural predator-prey system by having industrial disturbance on the landscape,“ Seip said in talking with communities about the cull.  “Caribou are relatively safe as long as a high-elevation refuge is in place.”

Additionally, caribou are greatly affected by the presence of snowmobiles in their winter territory and rather than increasing protected areas for animals in December, the province has decided to spend an unknown amount of money having biologists update maps daily so recreational vehicle users have greater access to delicate caribou winter habitat.  Members of the Valhalla Wilderness Society (VHS), based in New Denver BC, question why the dire state of caribou is considered an emergency when it comes to killing predators, however in the case of allowing snowmobiles and heli-skiers to swarm their critical winter habitat or in the presence of requests for clear-cutting and pipelines there’s no emergency.  VHS asks that the current protection of only 3.3 percent of the ungulate winter range from snowmobile use be expanded to 6.5 percent of the Central Selkirk Range.

“The expanded wolf cull is not a solution as it has to be repeated every year,” says Trev Miller with the Cranbrook Friends of Animals Society.  “It’s worth discussing the province’s cruel use of “Judas” animals in these mass exterminations as well. One wolf fitted with a tracker repeatedly joins new wolfpacks seeking companionship and fulfillment of natural behaviours, only so humans with guns can find and kill new families — if the stopgap solution is slaughtering wild animals to save other animals, it’s time to implement proactive approaches to the issue.”

Be a voice for the wolves

The public only has a brief window to comment on the cull, which will also include the use of inhumane neck snares.  These traps have never been scientifically proven to kill animals in less than five minutes, which is the standard outlined under the Agreement on International Humane Trapping Standards that Canada signed in 1997 and ratified in 1999.  Luckily for the provincial government in this case, neck snares aren’t part of that agreement because relevant Canadian agencies decided snares were not commercial killing devices — since they can also be made at home.

Letters can be emailed to the province at caribou.recovery@gov.bc.ca, and FLNR.minister@gov.bc.ca.