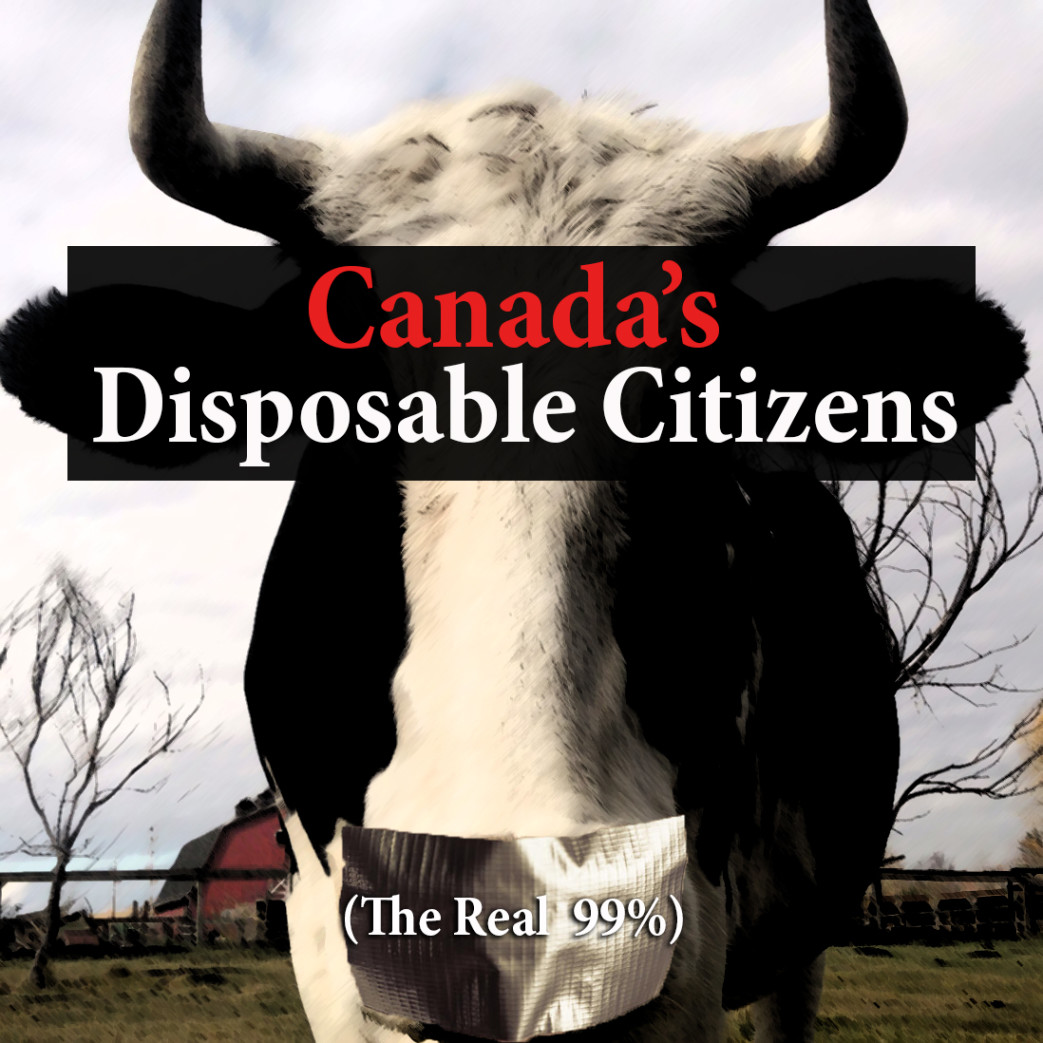 If I said that Canada had a population of close to one billion, few if anyone would believe me.

If I told you that 99% of that population would be killed this year, I would probably get a visit from CSIS as a terrorist threat to the nation.

However, this wouldn’t be a deception or threat.  It would be a factual account of the number of non-human animals killed in Canada every year; and yes, I refer to ‘animals’ as “non-human animals,” so as to recognize that we, as humans, are animals too.

To break it down, approximately 700 million animals will be raised and killed for food in Canada this year. The dairy industry exploits close to 1 million animals each year, and then there is the untold numbers of fish and marine life killed each year at nearly 1 million metric tonnes. When you take into account the 15 million companion animals, all the animals killed to feed them, and the wild animals killed by hunting, trapping, fur-farming, and beyond, my estimate of  Canada’s population being one billion begins to look a bit more reasonable. This is the 99% of Canada’s population that have been made disposal by the industries that exploit them for profit and by our government that fails to recognize them as citizens worthy of recognition and protection in our society.

Let’s not forget the 35 million people who make this all happen either.

It is important to talk about the 35 million people, because right now about 23 million of them are the only ones in the upcoming federal election who may vote on which party will have power over how all 1 billion lives in Canada will be affected.  It may not seem very representative to have 23 million individuals decide the fate of 1 billion, but that is exactly why there is a need to raise awareness of the tremendous number of lives taken each year and the social cost of this indifferent, systemic, and unbaiting violence against non-human animals.

Now, someone will read this and thinking to themselves, “They want to give animals the right to vote!”  Absolutely not.  What Animal Alliance Environment Voters Party of Canada wants to do is to give these 1 billion members of Canadian society representation at the federal level.  We want those who are able to vote to be able to make an informed choice when they are deciding which party to vote for.  Right now, none of the mainstream parties are talking about animal issues in their campaign.  Why?  Because these issues are considered dangerous for political parties – protecting those who can’t vote from those who can. Yet, we know that people care about non-human animals.

There are other good reasons why we should be concerned that the mainstream parties are not talking about the lives and plight of non-human animals.

One, is the environment.  Any political party who says their priority is the environment, but does not talk about or take seriously the impact of the animal agriculture industry on climate change or the environment as a whole is pandering for votes.  I have heard every mainstream party in this election support the animal agriculture industry in one way or another and I have not had a straight response from any of them about how they will address this issue or why they are not talking about it.  It literally feels as though we are living in a cowspiracy, and that every political party is stepping around the issue whenever it is brought up.

We have to ask ourselves as citizens if these parties are representing our interests first or those of the meat, dairy, and egg lobbies that are subsidized to the tune of $6-8 Billion dollars a year by our government to keep them in business. If they aren’t putting our interests first, what other social justice, environmental, and public interests are they willing to compromise for votes and potentially financial support.

Compromising the integrity of the lives of other animals for profit and power directly compromises the integrity of our own as people. Thousands of people in Canada spend their time, energy, and money providing an essential service to the hundreds of thousands of cats and dogs, and other non-human animals that are disposed of by those responsible for their care. This places a huge burden upon civil society that do their best to treat the symptoms of the problem, with little to no support from the government to treat the root issues of this form of homelessness that constantly overwhelms shelters and rescues with lives to care for.

Furthermore, our human health is under attack by the propaganda of the meat, dairy, and egg industries that promote their products as being essential or beneficial for our health.  As a vegan for the last 5 years I can tell you that being healthy has nothing to do with eating other animals. Meat, dairy, and egg products are not only destroying the environment we depend on for clean air and fresh water, but also our bodies directly and perhaps even our health care system.  Diets high in these products have been shown to lead to increased risk of cancer, diabetes, and heart disease.  In many cases, high protein diets associated with these foods are shown to make humans four times more likely to die of cancer.  These products all have negative health consequences which in turn undermine the integrity of our health-care system to provide care for all those who become ill due to the effects of meat, eggs, and dairy.  Yet, we don’t hear the government take measures to educate people about the harmful effects of these foods and the benefits of a plant-based diet and lifestyle.  Are we that disposable to the government as well in the interest of profit?

Animal Alliance Environment Voters candidates are in a powerful position when it comes to serving the health, environment, and protections of all individuals  in our communities because we are led by our values first, not by trying to be the most popular vote. I do not see any of our citizens as disposable, because I know every individual has their own set of needs and interests that are deserving of recognition and representation. I also do not see the lives of non-human animals as disposable, which right now our current government does by inaction on the violence against them in our homes, in the wild, and in the institutions that abuse them for profit.

A truly inclusive government gives a voice, even if it is through representatives, to all those under its care and leadership.  I see my role in this election as giving a voice to the over one billion non-human animals that are silenced in the shadows of slaughterhouses and processing plants each year, live in our homes, and free in the wild.  I don’t know how any political party or representative could take the representation of their constituency more seriously than starting by protecting the most vulnerable in our society and working up.

No member of our society should be disposable for profit or for private interest.  If we do this, we set the moral standard of what is acceptable treatment for any vulnerable individual in our society at a deplorable level.

It often discomforts people to think of themselves as animals in a continuum of unique manifestations of that concept. However, I am asserting we are all equal even if we are different, which I believe is indispensable in an inclusive and compassionate society.

Sources and Articles of Interest: