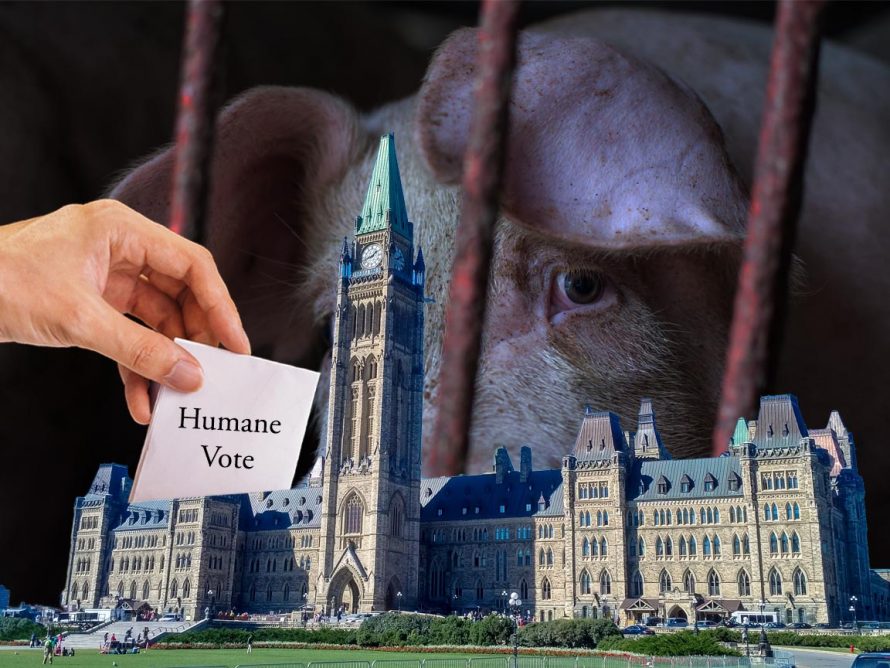 It is an essential phrase in any animal activist’s handbook: “Humane meat is a lie!”

As vegans and animal advocates on the animal rights/liberation spectrum doing our best to represent the interests of the animals who are killed for meat, eggs, and dairy we recognize that there is no humane way of killing someone who does not want to die.

Contradictory to this position are animal welfarists. They believe it is fine for us to use animals in various ways, but we should be as nice as possible about it (unless it eats into profit margins too much).

As a vegan and animal activist, I became involved with the Animal Protection Party of Canada (APPC) because I saw just how poorly animals were represented in politics across Canada.  As an APPC candidate, people often ask me why I do not just run for a more mainstream political party such as the Greens or NDP and try to change things from the inside.  For me, on principle, running for a political party that is not willing to address animal agriculture or the plight of animals, or did not even have the word “animal” anywhere in their policy was not where I thought I would be able to best do my job of trying to representing the interests of animals politically.

This is not to say that candidates who are vegans or animal advocates in other political parties are compromising their values for political gain.  Some of them have been very successful at raising the profile of animal issues in parliament. However, due to the constraints imposed on them by their political party’s indifference to the major animal issues, the fallout is animal welfarist policy at best that fails the majority of animals in Canada.

There are some recent examples from the last sitting of parliament that are worth examining:

Bill C-246, the Modernizing Animal Protections Act, brought forward by vegan Liberal backbencher Nathaniel Erskine-Smith.  A bill that had existed in different forms for more than a decade, this bill failed in the House of Commons on its first vote.  Nathaniel’s own party failed to support a bill that would have made moderate improvements for animals across Canada. However, fear mongering from within the Liberal party and the Conservatives killed the Bill.

Bill C-84, Beastiality and Animal Fighting, Sponsored by the Minister of Justice, Jody Wilson-Raybould, who was in part responsible for stopping Bill C-246 above. This bill saw changes in the Canadian Criminal Code which would close some loop holes around the sexual abuse of animals and animal fighting.  Of course, exceptions were made for standard industry practices such as forcibly inseminating an animal on a farm. It passed because who is going to lose votes for opposing beastiality.

Bill S-203, Banning Cetacean Captivity, sponsored by Senator Wilfrid Moore. A bill that ended the ongoing import/export and captivity of cetaceans in Canada.  It passed, but grandfathered in those cetaceans currently in captivity such as at Marineland where 60 belugas still languish in tanks.

Bill S-238, Banning the Importation of Shark Fins, sponsored by Senator Michael MacDonald.  While shark finning has been illegal in Canada for a long time, this bill stopped the import of shark fins into Canada.  As one of the largest importers of shark fins in the world, this bill of all the animal bills considered in the last term will probably have the most significant impact for animals, just not those in Canada.

Bill S-214, the Cruelty Free Cosmetics Act, sponsored by Senator Carolyn Stewart Olsen.  A bill that would have ended cosmetic testing on animals in Canada, but it timed out before it could be passed.  Ultimately, this can be considered positive, as industry lobbyists were trying to create a loop-hole in the bill that would have allowed ingredients tested on animals outside of cosmetic products to still be used in cosmetics and to be labeled as cruelty free.

It should be mentioned that the three bills that did pass were done so in the last weeks of the government sitting; all bills that have not been passed before the House of Commons rises die and have to start again when government sits again (after the election).  Some of these bills had been moving through parliament for years and of the bills that passed, only one was brought forward by an elected representative. Furthermore, these are the first animal related bills in Canada to pass in over a century. When people say that Canada has some of the worst animal legislation in the world, they are right.

In summary, it took Canada over 100 years to pass three bills that helped almost none of the one billion animals we kill each year in the meat, dairy, egg, hunting, trapping, research, fur, and fishing industries. All the animals who suffer and die the most are completely ignored by the mainstream political parties. These bills are low-hanging fruit to politicians who want to pad their portfolios with voter palatable issues. However, issues such as limiting meat consumption, ending animal agriculture, or giving animals greater legal protections creates uncomfortable personal reflections of voters everyday habits. This is the underlying narrative of how animals are treated in our society that much of the public and mainstream politicians want to ignore.

Every candidate in the Animal Protection Party of Canada is a vegan and many are long-time activists who are putting themselves forward to get political for animals. As a considerable personal investment for each of them, they take the issues and position that they are running for seriously.  We are the only party that advocates equally for animals, people, and the environment.  With climate breakdown upon us, the plight of animals must be more than a welfarist program from decades past; yet, this is exactly what we are getting.

Search for the word “animal” in NDP or Liberal platforms and you will only see a blank.  The Greens have made a better effort, but ultimately fall into the humane trap and fail to adequately address animal agriculture in any meaningful way.  Animal welfare is the abusive policy we already have which excuses the most egregious violence against animals as “standard industry practice.” As for the Conservatives, Andrew Scheer’s comments on “revisiting” the Canada Food Guide, which almost went vegan this year, is not only frightening for animals, but for human health.

What this means for animals is that electing more mainstream political parties, too scared about losing votes to represent animal interests, is going to give us four more years of maybe one or two bills that achieve no recognizable difference for the billion animals being killed in Canada each year.  This is why the Animal Protection Party of Canada is growing across Canada right now.  Animal advocates are tired and disillusioned with the rhetoric from politicians that they “love animals” and are “champions for animals,” but aren’t willing to do anything that makes their supporters uncomfortable for them.

While political parties and organizations, including those within the animal movement, will try to convince you that humane voting is a kinder, gentler, and more just way to improve the lives of animals, do not swallow what they are serving you.  Humane voting is the humane meat of politics, the cost to the animals obscured, while trying to cover up the incalculable suffering they endure for political comfort.