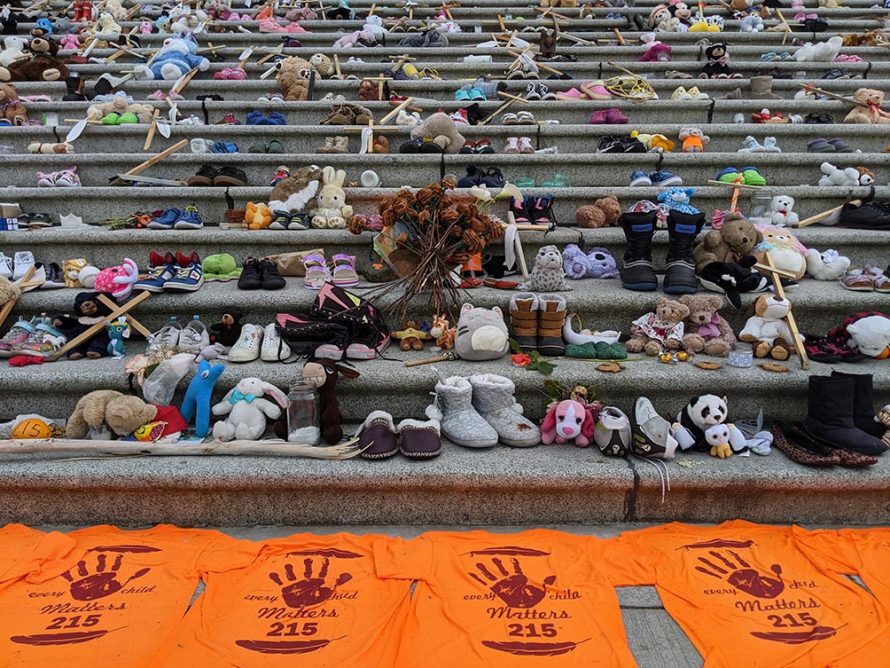 In May 2021, the remains of 215 Indigenous children were discovered in a burial site adjacent to a former residential school in Kamloops, British Columbia. This is just one in an ongoing nationwide search for the remains of Indigenous children. The children, whose deaths were all undocumented, were former students of Canada’s Residential Schooling program — they were children who never returned home after they were stolen from the families who loved them.

According to the Truth and Reconciliation Report (2015) Thousands of children died in residential schools and many endured unfathomable physical, sexual and psychological abuse at the hands of the Government of Canada and church officials who operated these boarding schools from 1870 -1996. Importantly, residential schools were only educational in name. Their purpose was to effectively assimilate Indigenous children into Euro-Canadian culture in such a way, that Indigenous worldviews, religious practices, culture, law, and identity would no longer exist. At a deeper level, the establishment of residential schools affirmed the European assumption that Indigenous people were unfit parents, who were culturally and morally inferior to European settlers.

The discovery of the 215 Indigenous children is a stark reminder of these colonial objectives as well as the resilience and courage of Indigenous communities across Canada who continue to fight for reparations in the face of government opposition and who are leading the charge to locate these burial sites. This discovery is also a reminder of the intergenerational trauma continued to be experienced by Indigenous communities in Canada as well as the lack of government action in implementing the directives set forth in the landmark Final Report of the Truth and Reconciliation Commission in 2015. There is still much work to be done to address the legacy of pain that the federal government and the Roman Catholic Church have caused.

Systemic injustices continue to be experienced by Indigenous communities, such as environmental racism, poverty, missing and murdered women, racism in policing, inequitable access to health care and land theft. We must move beyond good intentions and toward substantive reconciliation in Canada that involves accepting responsibility for what has happened and taking steps to make reparative amends.

Listening and acknowledging the truth of what happened at residential schools is important, but it is only the beginning. It is also significant for political parties, and indeed, for all members of society to understand the power and privilege we have inherited.[1] Without being direct agents of harm in most cases, we still have a responsibility to understand our entanglement in modern day injustices and to work toward breaking down the hierarchical social and political structures that contribute to a legacy of violence against Indigenous people in Canada.

The Animal Protection Party of Canada supports the implementation of the Calls to Action made by the Truth and Reconciliation Commission, as well as the recommendations of the United Nations Declaration on the Rights of Indigenous Peoples.