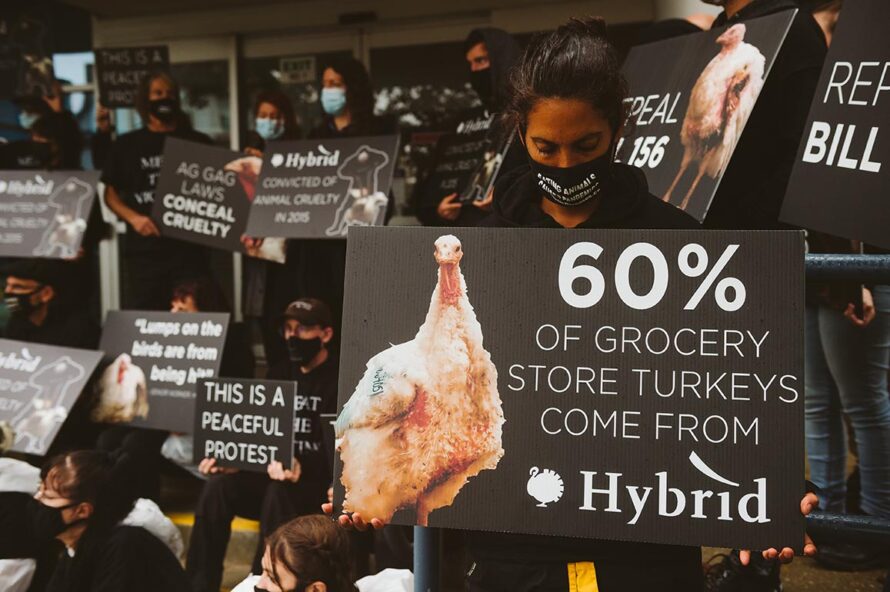 In 2019, over 150 activists from across Canada gathered for the Meat the Victims event in Abbotsford, B.C. at Excelsior pig farm. Over 70 activists entered the farm to capture live footage of the living conditions of the animals who were raised in and exposed to abuse and cruelty. While four of the activists face criminal charges for their peaceful actions, still no charges have been laid for animal cruelty.

On October 3rd 2021, the second Meat the Victims event in Canada took place in Southern Ontario. However, this time 6 activists were arrested hours before the event was due to begin, being charged with “attempted break and enter” and “attempted mischief.”

Despite this, 200 activists from across Canada gathered outside Hybrid Turkeys – one of the largest turkey breeding farms in the world that has faced charges for horrific animal cruelty. Their intent was to raise awareness of the abuse that turkeys face within factory farms in Canada, while also demanding that Bill 156, ag-gag legislation that makes it illegal for people to expose animal abuse taking place on farms, be repealed.

Farms are considered private operations, even if they are corporate-owned, and are therefore off-limits to those of us on the outside.  Provinces are responsible for on farm treatment of animals except that many provincial regulations exempt farmed animals based on “generally accepted practices.”  In fact, farmed animals have very limited protection under provincial laws and repeated undercover investigations continue to expose farmed animal abuse and cruelty across Canada.

The responsibility to investigate, expose and prosecute how animals are treated behind the dark walls of slaughterhouses and breeding farms should not fall to activists. It is a matter of public interest and in part, is the mandate of either the federal or provincial governments to ensure that the few protections for farmed animals that do exist are being upheld in all facilities where animals are raised, transported and slaughtered.  Instead of investing in an active on farm inspection programme, the provincial government used substantial resources to track these advocates, to block roads, and to “protect” the farm from public scrutiny.

The Animal Protection Party does not support the act of trespassing on private property.  However, these activists are not threats to public safety. They are concerned citizens who want to know the truth and disseminate it to broader society, so that we may make more informed decisions in our daily lives and hopefully through public policy in the interest of protecting vulnerable animals.

The Animal Protection Party of Canada condemns the use of ag-gag legislation and public resources at every level of government to silence and supress activism, especially where it is peaceful and seeks to encourage public discourse in opposition to violent and cruel acts towards individuals.

Every major expose of animal abuse in farms, slaughterhouses, transport, and feedlots has been procured through undercover operations and direct action.  Until the government offers transparency and accountability regarding the enforcement of the laws protecting animals and the treatment of animals in these places, actions of this nature will continue to be necessary to inform the public of abusive and illegal conduct hidden from the public.