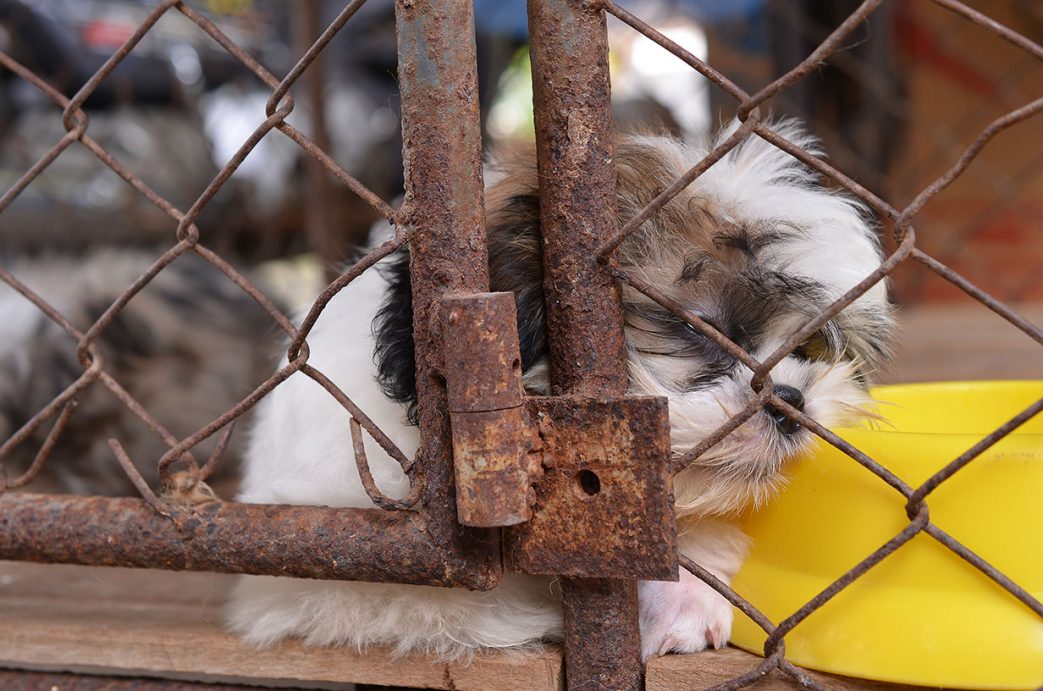 On Monday August 28th, APP West Coast Campaign Officer Jordan Reichert reported to the City of Nanaimo in support of a proposed ban on the retail sale of kittens, dogs, and rabbits previously put forward by the Nanaimo branch of the BC SPCA.  Below is his presentation.

Mayor and Council of Nanaimo,

It came to my attention a little over a week ago that the Nanaimo branch of the BC SPCA had been advocating for a ban on the retail sale of puppies, kittens, and rabbits in your city.  I came down from Victoria to present to you on the matter as a representative of the Animal Protection Party of Canada, as it is deeply multi-faceted issue and creates a tremendous social burden that is seldom recognized by various levels of government adequately.

I am happy to report that we no longer have any pet stores in Victoria that sell cats, dogs, or rabbits.  As someone who has had to deal with the fallout of the retail sale of rabbits in-particular, supporting efforts to move more than 100 rabbits to sanctuary in Texas, there is absolutely no excuse for the sale of rabbits as pets. Similarly, I work with many people in the community who care for cats, dogs, and other animals in need.  They are the unrecognized heroes of the community dedicating countless time, resources, and energy to help find these vulnerable individuals safety, food, and housing.  As you know, they do this all as non-profits out of compassion for the animals.  This is why the retail sale and breeding of animals for profit is such a disrespectful action in our society.  People are profiting off vulnerable lives and leaving the public to deal with the outfall of this irresponsible industry.  Let me make this perfectly clear, there are no responsible breeders.  They all contribute to the overpopulation of domestic animals in our communities.  Whether they breed their animals in a less humane way than others should be considered secondary to the social impact the action of breeding in general burdens society with.

Approximately 57% of Canadian household’s care for pets or about 7.5million animals.  There are far more cats than dogs on our homes, in shelters, and living on the streets with the most recent 2015 statistics showing that SPCA’s and Humane Societies across Canada took in over 35,000 dogs and 82,000 cats.  Approximately 4,200 dogs and 16,000 cats were euthanized.  This is just a fraction of a much larger picture as it only includes reporting from about half of these organizations facilities and does not include the numerous non-associated organizations doing rescue work across Canada.

Why this is important to know is that animals continue to languish in shelters and be abused in our homes. While many of us may never believe that violence against domestic animals is wide spread, the reality is that it is systemic.  The BCSPCA alone conducted over 9,788 new cruelty investigations last year alone, and that is only the reports where people provided the appropriate information allowing them to investigate. This also does not include all the abused animals that did not have someone contact the SPCA on their behalf.  With approximately 30 Animal Protection Officers in BC that amounts to a work load of approx 326 cases each per year.  This is all done with special powers granted to them by the Province to enforce the Prevention of Cruelty to Animal Act as a non-profit.

Another aspect of this I have worked on with Pets OK BC is the barrier to housing all the un-homed animals in BC.  Restrictive housing legislation. There is already a tremendous shortage of housing in BC and add the common “no pets’ policies of many rental units, and it can become a family dividing decision to choose between taking a loved pet with you to a new home or find affordable safe housing.  Approximately 90% of Canadians who are pet guardians consider them part of their family. No one should be forced to choose between a family member and housing.  While we create a situation of overpopulation by allowing the breeding and sale of animals as commodities to continue, we as a society don’t accommodate people who choose to take a vulnerable animal into their homes by allowing discriminatory “no pets” policies.  Approximately 1700 animals are abandoned to the BC SPCA alone each year due to housing related issues. Ontario, in contrast, has nullified “no pets” policies in that province for over 27 years without significant issues.

I want to bring this all back together to the point at hand.  Should the city of Nanaimo ban the retail sale of dogs, cats, and rabbits.  If we consider it from the perspective of the animals themselves, the BCSPCA has already made a good case for the reduction of suffering of animals raised in puppy mill type situations and sent to pet stores for marked-up sale.  The well-being of the animals themselves should be the primary deciding factor and should always outweigh the consideration of profit.

From a social responsibility standpoint, I have argued that we have a responsibility as a compassionate community to limit the number of animals dependent upon humans for their care, as the systemic violence against them due to their powerlessness in our homes away from public scrutiny is unconscionable.

Furthermore, the burden on the people and organization who care for the tens of thousands of homeless animals across BC is promoted by the proliferation of animals in the settings allowed by retail and breeder sales.  It is traumatizing, exhausting, and often thankless work that is further beleaguered by the sale of animals as commodities.

I have read a petition opposed to the proposed ban that illustrates the problem with the sale of animals.  It is claimed that puppies amount to 40% of one retailer’s total sales before tax.  When profit is the driving force behind the sale of vulnerable animals, corners are always cut to maximize the return and reduce costs.  That is why it is important you heed the concerns voiced by the SPCA.  There are numerous pet food stores that operate across the Island and BC that do not sell a single living animal, and do well for themselves. It is unlikely there will ever be a lack of un-homed animals and we should count ourselves lucky if that day did come, because it would mean we had done something right.  People have a choice in how they make a living, but that choice should be limited when its foundation is the exploitation of other people and animals for profit.

Lastly, I would ask that you consider including reptiles, fish, and birds, in the ban should you decide to go that route.  These animals are just as vulnerable and abused as cats and dogs, but are given so much less consideration due simply to their nature.  If you’ve been to any reptile exhibition or the former parrot refuge in Coombs you will know exactly what I mean.  Furthermore, the issue of the trade in exotic species, wild caught animals, and the escape of invasive species into the local environment, which has become a problem in Victoria, should be ample reason to include these animals under a ban.

We should not look at non-human animals as property that we are entitled to own.  They are vulnerable individuals that are deserving of the same respect as any other member of the community at large and it should be seen as a social responsibility to care for the situation of overpopulation we have created.  That also means doing what we must to curb activities that contribute to this overpopulation.

This is why I urge you to ban the sale of dogs, cats, and rabbits in retail stores in your beautiful city.  It will serve your community of people and pets far greater to end this form of exploitation.  Similarly, it will empower a growing message across Canada of responsible pet guardianship which is invaluable to promoting a more equal, inclusive, and compassionate relationship with non-human animals in and out of our homes.

Original letter from the Nanaimo SPCA and Nature BC can be found here: Pages 121-128