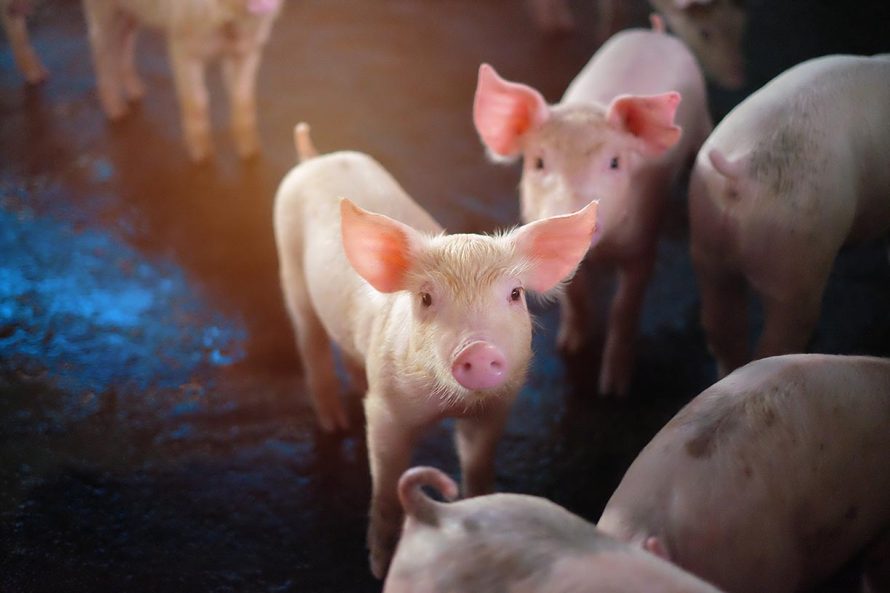 In 2014, the National Farm Animal Care Council Codes of Practice for the Care and Handling of Pigs was established.  These Codes of Practice (CPs) are revisited every five years, so 2019 was the year they were up for consideration.  Composition of the Committee was deeply flawed with the Code Technical Panel (CTP) created made up of industry stakeholders to review the CPs.

One consideration under review was “periodic exercise.” The document states “The CTP does not believe that periodic exercise offers much welfare value to sows maintained in gestation stalls.” Furthermore, “walking sows around the barn at regular intervals, nor housing animals in stalls that enable them to turn around, are ideal solutions.” Even though there are benefits to the pigs of being able to move around, the farmers aren’t willing to provide the necessary space and time and enrichment for the pigs According to the review, since it is not ideal for the farmers, such required enrichment shouldn’t be forced upon them.

The second consideration was the transition to group housing from individual stalls by the established deadline of 2024, 10 years after the original recommendations in 2014.  The Committee acknowledged that group housing was better for the pigs.  In the summary, they state, “Periodic exercise does not provide an equivalent animal welfare benefit when compared to the freedom of choice, the amount of free movement and social interaction the sows receive in a group environment” (pg. 2)

Despite already having 10 years to change, the CTP cited that the industry could not make this change without “compromising the welfare of the animals,” and without causing “significant financial burden for some producers.”  They do mention that 60% of producers will have converted to group housing by 2024but instead of working with the 40% of producers so they are compliant by 2024, they decide to revise their recommendations to require compliance by 2029, or another nine years from now.

The original timelines of 2024 must be maintained in the interest of animal welfare and in the interests of those producers who will comply with the changes by 2024.  If 60% of the industry can meet the timeline, why can’t the remaining 40%.   Where financial barriers exist to implementation, industry must collectively bear the cost of ensuring all producers are able to transition by the original timeline by paying into a fund or other means.

The original timelines of 2024 must be maintained in the interest of animal welfare.  Also, the wording that has been removed with regards to “exercise periodically,” should be reinserted to ensure a greater emphasis on quality of life. Where financial barriers exist to implementation, industry must collectively bear the cost of ensuring all producers are able to transition by the original timeline by paying into a fund or other means.

The original timelines of 2024 must be maintained in the interest of animal welfare.  Space allowance should be ensured as a guaranteed minimum from the outset recognizing that gilts, sows and boars will have different housing needs. Group space allowances should provide for social interaction, proper bedding, and enrichment.

Under cover videos released on pig farms show serious violations in the handling of pigs.  All commercial farms should be required to have video surveillance to monitor animal welfare issues and stockmanship skills and the video should be available review by third-parties, such as veterinarians or agriculture and cruelty inspectors, where issue arise. This would also help ensure proper handling is being followed and document abuse of power.

The current commitments to a 2024 timeline for implementation of the guidelines must be maintained. The period of 10 years to implement these changes is significant and extending the timeline due to financial barriers should be the burden of the pig industry, not the animals who suffer due to its failure to adapt.  This is particularly true because the industry has already had 10 years to adapt.

Looking at the Code Technical Panel members, of the 12 people who sit on the board, only one is from animal welfare organization Humane Canada, Geoff Urton, from the BC SPCA.  The remaining panel members are from the pork or meat industry, or the ministry of agriculture. Their priorities are based on industry business models, many of which are vertically integrated businesses delivering “just in time product” not animal welfare standards.  At a minimum, the panel should be comprised equally of those with a background in animal advocacy and protection of farmed animals.

The National Farm Animal Care Council is not an animal advocacy organization. The Council is an industry led organization that develops “guidelines” for the care and handling of farm animals which are not legally binding in most cases. Even in cases where their “PigCARE” program is a requirement for use of federally inspected slaughterhouses, there is no oversight to ensure any of these standards are maintained.  As has been shown through numerous undercover investigations across Canada, even where farms are considered to operate at the highest industry standards the welfare of animals is abysmal and cruelty is persistent.

While there is a significant attempt in the document to frame the issue as one of concern for animal welfare, it is ultimately about protecting producers from the costs associated with improving conditions. Ten years is a significant amount of time to implement the earlier recommendations, and pushing them back to 2029 is inexcusable.

What we need is a concerted effort to phase out and transition the animal agriculture sector to plant-based.  Without a commitment from all levels of government towards this goal, we will continue to have hundreds of millions of animals suffering behind closed doors without public oversight.

In delaying the implementation of the most basic of animal welfare improvements for pigs raised as food, the industry and NFACC fail to take into account changing public opinion about how farmed animals are treated as well as the science that demonstrates why these minimal changes should be implemented immediately.  They do so at their own peril.  Growing interest in “alternative meats” will continue and an increasing segment of the Canadian population will turn away from animal products.  This trend will happen much faster as the agricultural community resists implementing even the most basic animal welfare measures and tries to hide the reality of industrial farming from consumers.

The failure of NFACC to require the industry to meet the 2024 commitment and resistance by the industry to comply with the 2024 target leaves it open to justified public criticism and provides organizations like ours the evidence we need to push for alternatives that don’t involve cruelty and abuse.

Donate to help us fight against animal abuse on farms across Canada.