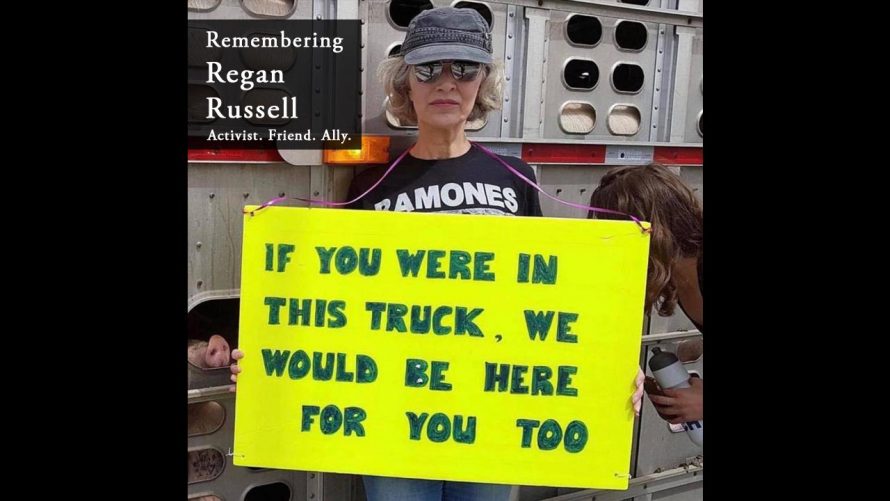 It has been a week since Regan Russell died so tragically.  It has been the first time I have been able to put pen to paper in her memory.  We did not talk often but when we did, it was as if we talked every day.  I have spent the week remembering all that Regan offered to our movement and the animals.  I’m sure I have forgotten some events but the ones I remember speak to who Regan was.

In 1979, several years before I became involved in the animal rights movement, Regan was already fighting for animals.  My colleague, Georges Dupras met Regan while working to end the Canadian seal hunt.

In 1990, when a group of us left the Humane Society and formed Animal Alliance, Regan was there.

When Zoocheck and Animal Alliance joined forces to save the wild horses on CFB Suffield in Alberta, Regan was there.

Over the years we worked on a multitude of issues facing animals in Canada and Regan was always there.

The last time I saw her was at a talk in Hamilton.  I tried to convince her to be a candidate for our Animal Protection Party.  She would have been dynamite, however she declined, not because she wasn’t interested but because she did not want to be in the spotlight.  That was who Regan was.

In the last five years while she protested at Fearmans pig slaughter operation, I would have the occasional conversation with her dad, Bill.  He was clearly very proud of his daughter and her passion and compassion.

If I were able to speak to her now, this is what I would say:

Regan, we miss you, your bright smile, your endless energy and your sheer determination to protect all animals.  The animals have lost a dedicated advocate.  They have lost you, the person who would fight tirelessly for their liberty.

Regan, here is our commitment to you.  We will never give up.  We will fight with all that we have to seek justice and liberty for the animals.  We will fight to defeat Bill 156 which is designed to hide the oppression and suffering of farmed animals in Ontario and across Canada.

Regan, over the thirty-three years that I know you, you were always there for the animals.  Now, we will be there for you, to carry on your work.

In her memory, our Animal Protection Party will do what is necessary to defeat Bill 156.

In her memory, we will expose Canada’s current electoral system that allows for the coverup of the terrible treatment of farmed animals.

In her memory, we will fight for compassionate politics that protects all of us – people, animals and the environment.

Regan did not have to go out that day, Friday, June 19th. The government had issued a heat alert for here in southern Ontario, the dangers of heat and humidity augmented by the presence of Covid-19, the pandemic. Regan spent the last day of her life, her final hours doing what she did in opposition to oppression, abuse and cruelty.

These are unhappily strange times and early on the morning of the 19th I was, as usual, staring at my computer, perusing news about the social upheavals worldwide as a result of events forcing enhanced recognition of bigotry, racial disparity, and the plight of minorities supressed disproportionately, even killed by the police when there was no need or moral justification.  All of us become familiar with names like Breonna Taylor, Ahmaud Arbery, George Floyd, Rayshard Brooks, all so prominent in U.S. news coverage.  The Black Lives Matter movement is entirely supported by anyone who cares about fairness, justice, equality, and the enforcement of legally enshrined rights. Regan cared and had recently attended a BLM rally.

But I know for sure that Regan understood Friday morning as she got ready to leave home for what she could not know was the last time, all lives do not matter, and that is a fact enshrined by law, enhanced by an Ontario law passed just two days earlier.

All lives do not matter. Our genes still determine our treatment by society.  The DNA that determines our skin colour, gender, sexual orientation, mental capacity and the circumstances that determine our religion or nationality are things over which we have no control, but neither do we have control over our species.   If we’re born the wrong one, which means pretty well any one of the majority of the earth’s individuals, thus not reading this or able to speak on our own behalf, we may be legally tortured and tormented for fun or, indeed, more often for profit so there can be spare ribs on the table tonight, ham in the sandwich.

Millions did stay cool, enjoyed leisure, that Friday, and many would, that night, dine on ribs or chops or ham, it being unthinkable not to.  For those people who could do that, others must suffer pain, fear, premature death.  Even though they also wanted to live, also had the ability to feel fear and pain, vast numbers of pigs were moved out of horrific, noisy, dirty confines, absent the feel of grass, sun or rain through their short, severely confined lives, and were shipped, whatever the weather, with assembly-line efficiency, jammed into trucks, sent to places where they would be lined up and, one by one killed, more than 45,000 of them slaughtered in a week at the one plant that was Regan’s destination when she left home that hot, Friday morning.

And what was Regan going to do?  She was trying to relieve the terrible suffering endured by these pigs.  She wanted to convince everyone she talked to that a healthy life could be lived without imposing suffering on millions of farmed any by changing to a plant-based diet.

What Regan was doing was trying to do was what she had done before over the last four years.  She was going off to again bear witness, to acknowledge at some level that these beings also had interests, could also suffer.  And she sought to ease their suffering, as did a handful of other activists present, with something we all take for granted, even on a blazing hot day, until we don’t have it:  water.  She was just giving them water, and in that simple gesture, she showed that we should not be indifferent to suffering.

Bill 156 makes it not only all the more difficult to shine the light of transparency on how animals may be abused in agriculture but leads to an egregious degree of punishment against those who try to reveal truths.  The bill prevents investigations by journalists, individuals like you and me and groups such as Last Chance for Animals, Mercy for Animals, People for the Ethical Treatment of Animals and others whose hidden cameras and undercover investigations have brought to light so much painful mishandling of animals in the interest of what so many people eat or wear.

It is abuse that happens whether we see it or not.  Bill 156 seeks to hide the abuses.  Few dangers to society are greater than the elimination of transparency and provision of hard facts.  Beware the secret state.  That is why before it was passed Bill 156 was criticized by dozens of lawyers and legal scholars as unconstitutional, and why, on June 10, the Canadian Association of Journalist raised numerous concerns in written testimony, all ignored.

Regan wanted to bear witness, to give water to parched, panting animals soon to die, to hold up a sign, to exercise what democracies around the world see as a fundamental right, to advocate, peacefully, on behalf of others.

Regan wanted the world to see how farmed animals suffer and Friday, just a week ago, she went to the vigil in opposition to Bill 156.

Bearing witness does everything that Bill 156 is trying to stop.  It exposes the suffering and forces the question – How does a society like Canada that considers itself civilized become complicit in such terrible treatment of other sentient beings?