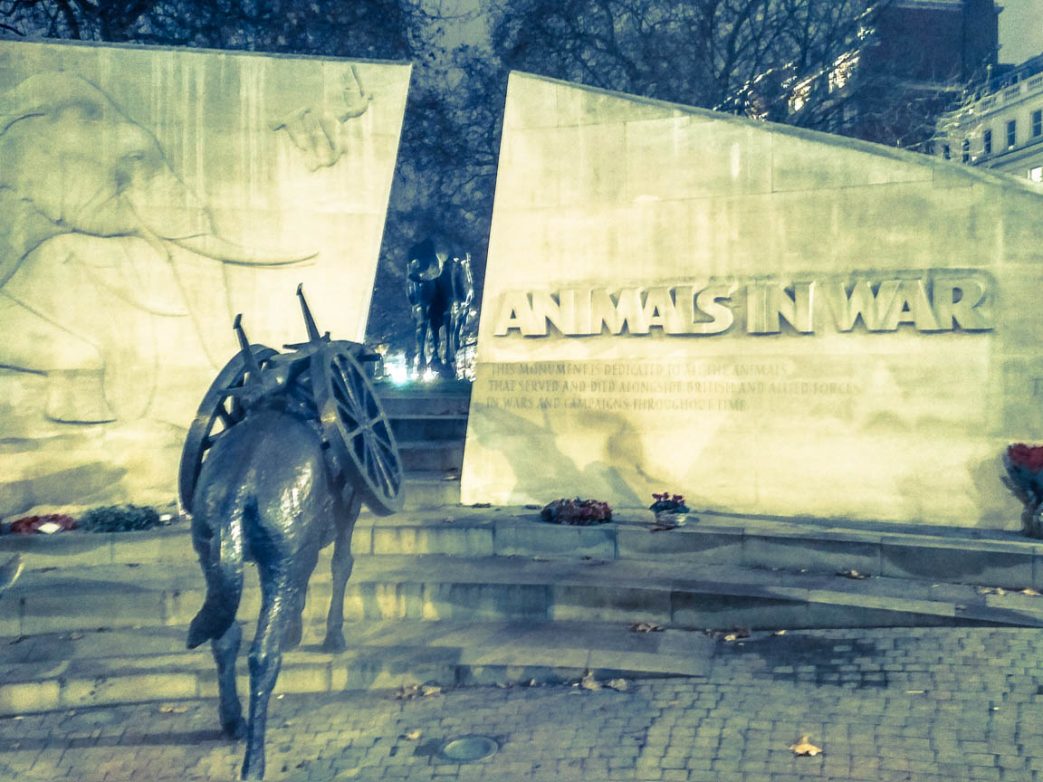 We are holding a online memorial for the Animal Victims of War through Facebook here, starting at 11am (PST) November 11th, 2020.

To begin, let there be no mistake that the lives of non-human animals lost to war are lives taken, not given.  Humans can make a choice to sacrifice their lives for a cause or some greater purpose. Animals are not able to sacrifice themselves because they cannot comprehend why they are being forced into war by humans.  Furthermore, this article discusses why animals are not “heroes” either and why the promotion of such a notion is harmful in our society.

The ‘Animals in War’ Memorial in Hyde Park, London.

When humans give themselves over to the ideological illusion of patriotic duty to a country, a landmass, a spiritual symbol, or a flag they do so as agents who have to some degree consented to being used for its purposes. Even if soldiers do not know the true intent of the political powers that valourize their sacrifice in warfare, they accept that their actions will contribute to some greater purpose. That is not to say that all soldiers are willing participants of war. 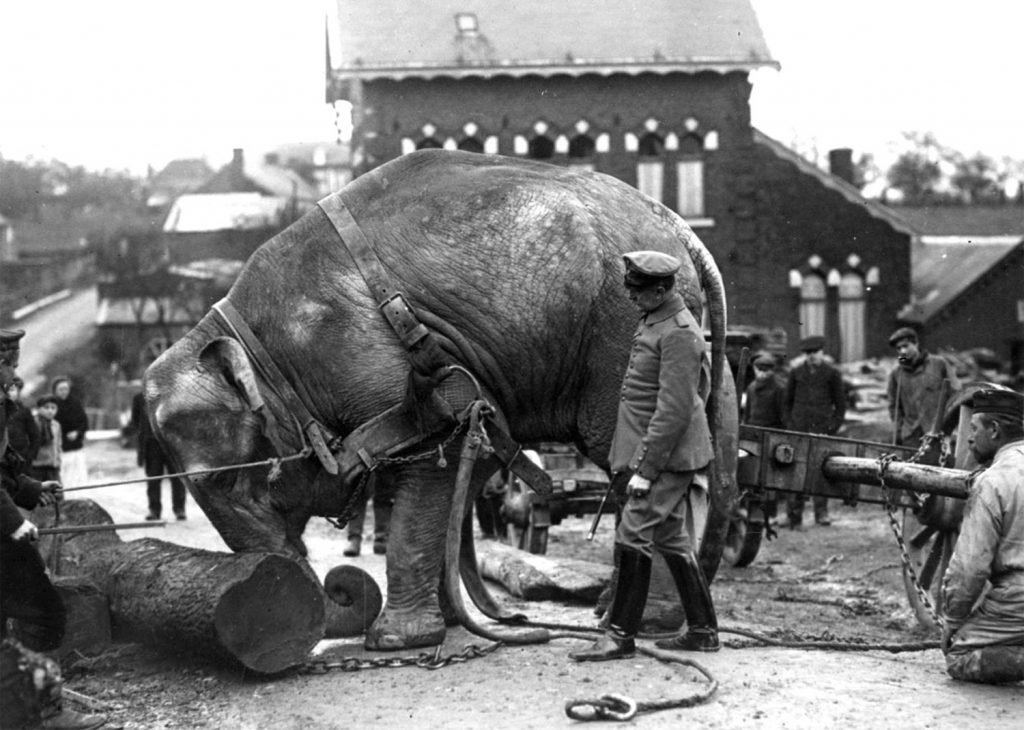 Alternately, non-human animals used in war are beings thrust into the world of human ideals and structures. Forced into wars where their dedication is respected, but their obedience is demanded, they must serve endlessly until exhausted.

Their ‘service’ is not something to be honoured; it is something to be reviled. While we must already navigate the sea of ethical quandaries in the awkward integration of other animals in our lives, there is no reason to anthropomorphize the ‘valor’ and ‘courage’ of these beings. The dedication of these non-human animals is a testament only to the utter domination of human exceptionalism in cruelty and exploitation over those who have no power to resist. War does not bring prestige to these coerced animals; monuments erected in their honor do not validate the somber march whipped upon them. Nor should the images of tender moments between soldiers and puppies, cats, horses, bears, pigeons, and more endear us to the notion that these theaters of terror are purified or made less horrific because of the presence of innocent creatures bringing soldiers a reprieve from the madness of war. These images are taken out of context and belie the enslavement and abuse experienced by other animals to become seemingly willing participants in something they could not possibly understand.

It may be impossible to account accurately for the total number of animal casualties of wars in just the last century. It is estimated that 8 million horses died in the first World War alone amongst many more donkeys and mules. In total over 16 million animals were used in just World War I Another 750,000 domestic animals were killed by their guardians in Britain before the start of World War II, to conserve food rations. 100,000 carrier pigeons were used to carry messages and died. Even more were experimented on for testing chemical warfare and training purposes (that still continues today), used as mascots to liven the spirits of soldiers (this is the origin of Winnie the Pooh), and used as mine sweepers. Without other animals to exploit, it is hard to imagine how the first world war could have even unfolded as it did. They were the cogs that kept the machine of war in motion and their bodies were the bloody foundation upon which it was waged. 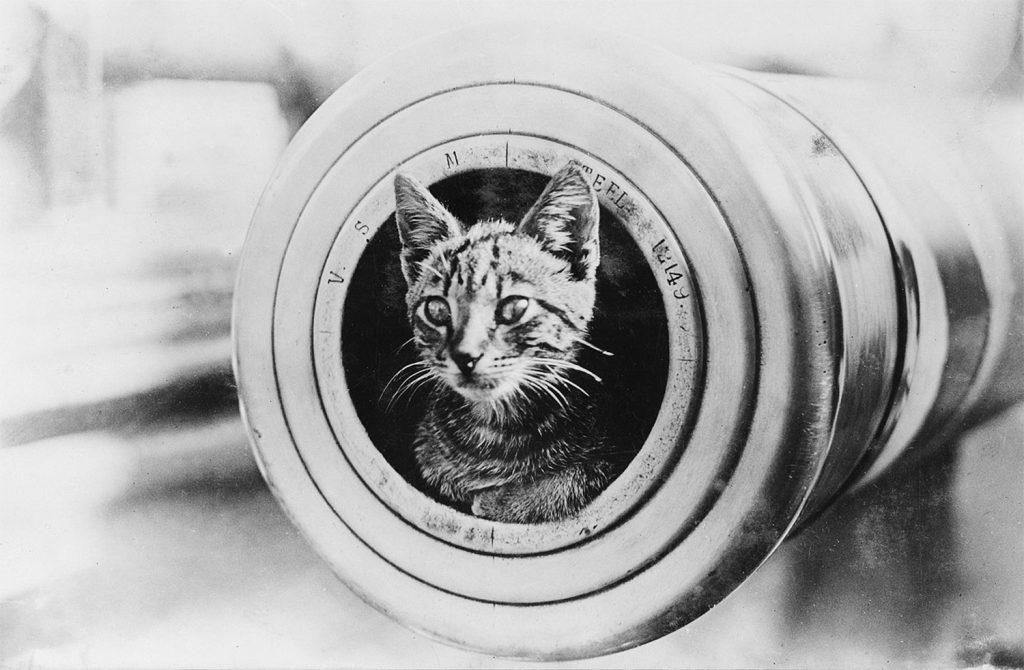 While rulers have used animals to drive fear and awe into the hearts of their enemies in war throughout history, the intention has never changed. Other animals are skillful, unique, and intelligent in ways that human animals often fail. Even our best machines, fastest computers, and most intelligent robots seem awkward and clunky in real world dynamic environments that are made for flesh and blood responses. Other animals have been incorporated into warfare as organic weapons to overcome our own psychological and physical frailty. The idea that these others are more ferocious, more carnal, and terrifying than the sanitized and decorated hero on the mount makes them into an ideal beyond what a human soldier can be. This image is a picture easy to paint, but is lacking in context. They are not born for war or to be vicious, it is the instilling of our abject capacity into their hearts through brutality and intimidation that brings out the most terrifying aspect of their beauty. When the hearts of soldiers have no place or power to affect change, no way to escape the torment of their condition except to march on, then those with the least power will feel the brunt of their suffering and trauma, and be made into the very darkness that consumes the soldiers heart. This is the manifestation of the animal turned soldier.

Despite being companions and heroes to many, it seems that animals will always be treated as less than equals. As much as they can be an intimidating force on the battlefield, they are just as easily manipulated into the ideal test subject by those who believe there is no sacrifice too great in the name of science and the modernistic project of progress that war is a convenient facilitator of. All animal experimentation is a product of the human’s war. When I say the human’s war I do not mean every human, I mean those who embrace the idea of humanity as a project in itself, aside and exceptional to the rest of nature. This is the war that is superimposed on all wars, as if viewing them all through a looking glass. It is the war that turns other animals into machines, into product, and into entertainment. It is the war that grips them and under this gaze forms them into pieces of a game to be played out like the lives of so many others marginalized and exploited by society. Yet, because the looking glass has layers that each human can use from the condition based vantage point they stand at in society, the intensity and focus of the gaze is strongest at the bottom where the weight of all those other gazes is compounded. If the gaze from above imbues the idea that other animals are of lesser value than humanity and that we are entitled to exploit other animals through that value judgement, then without a way of looking back up and reflecting their gaze back upon us, it is accepted and the war is justified on those terms. 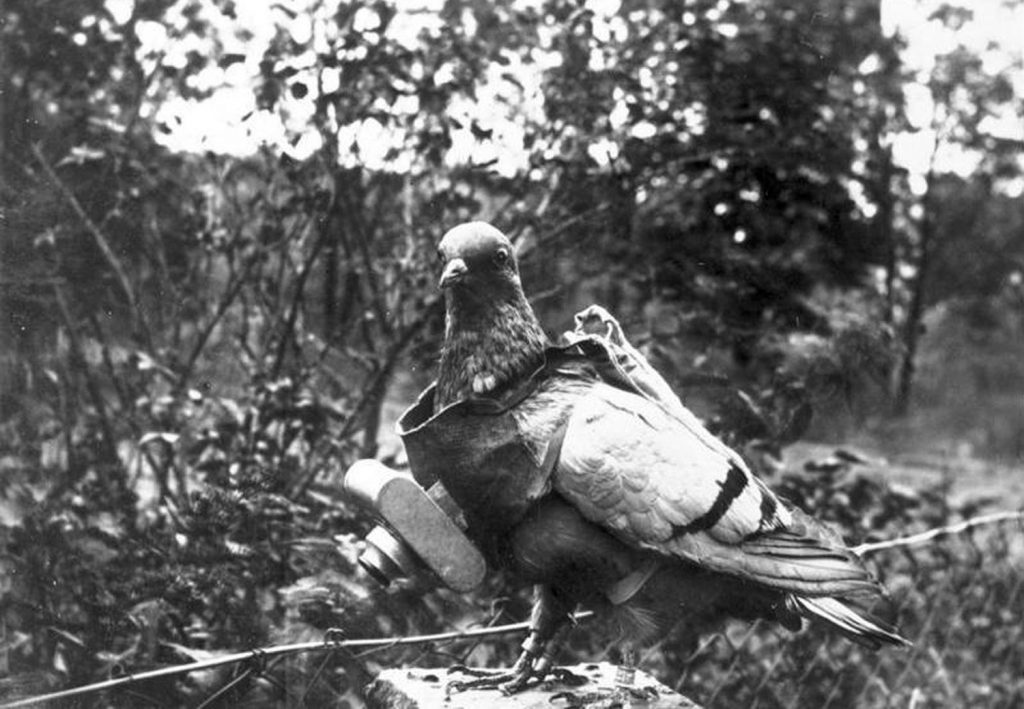 For everything we have taken from them and all their blood we have spilt in the name of war, the great majority of the world only recognizes their coerced sacrifice with violence and disdain against them. With 100 billion non-human animal lives brutally taken each year around the world for unnecessary food alone, violence against animals continues in a dark, silent, merciless and indifferent perpetuity that transcends the word “war.” It is a chasm that has become cold and irreconcilable.

This is why the purple poppy exists. It is to represent an ideal that stands apart from the war within the war and challenge the dominant discourse that invalidates the experience of other animals. It is a symbol of their victimization in war and recognition of them as more than objects of human design. It does not excuse their torture, their suffering, and fear in the name of some greater ‘good.’ It only remembers the truth that what is the best about them and us is lost when our human ideals overpower our animal sensibilities.

The purple poppy campaign is now organized through the Animal Alliance of Canada. You can learn more here.